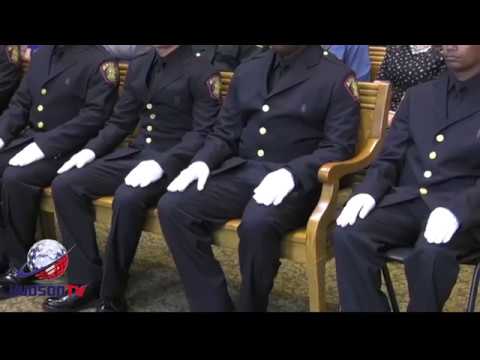 12 Jersey City police officers have been put on restricted duty due to an ongoing federal probe showing a total of approximately $1 million collected from off-duty work in the last two years.

The off-duty jobs program, a benefit of the police union, gives Jersey City police officers the right to work off-duty for private security companies, so long as the the companies go through the city when hiring.

Most of the hiring was done for Jersey City construction sites, with some officers allegedly trading their off-duty shifts with colleagues on duty resulting in dual pay for that work day and neglecting either their patrol duties or security responsibilities.

The 12, 1 detective and 11 police officers, have been stripped of their guns and assigned non-enforcement duties.

The FBI is questioning whether or not the police officers abused the program by collecting money from private companies unbeknownst to the city. In September Juan Romaniello, a former Jersey City police officer, admitted to accepting over $230,000 in corrupt payments. Romaniello was in charge of dispatching police officers to their off-duty jobs, and used the opportunity to arrange a scheme to get the businesses to pay the cops directly. He pleaded guilty before Newark federal court to information charging him with one count of conspiracy to commit fraud and accept corrupt payments and one count of filing a false tax return.

Jersey Journal records show that in 2015 and 2016, the 12 police officers collected a total of over $980,000, with some off-duty officers earning more than their total yearly salaries. One police officer topped his approximate $76,000 official salary by making a total of $89,120 off duty. The officers apparently took the money under the table, without declaring their earnings to the city.

The Jersey City Police Officers Benevolent Association president, Carmine Disbrow, issued a statement denouncing the alleged leaking of the officer’s names, “Offering these names up does a disservice to the JCPD, and to the integrity of the investigation.” Disbrow asked the public to not make any assumptions, “Until the facts of this case become more apparent, we ask the public not to rush to judgement, and to keep in mind the tremendous efforts of the JCPD to keep our city safe.”