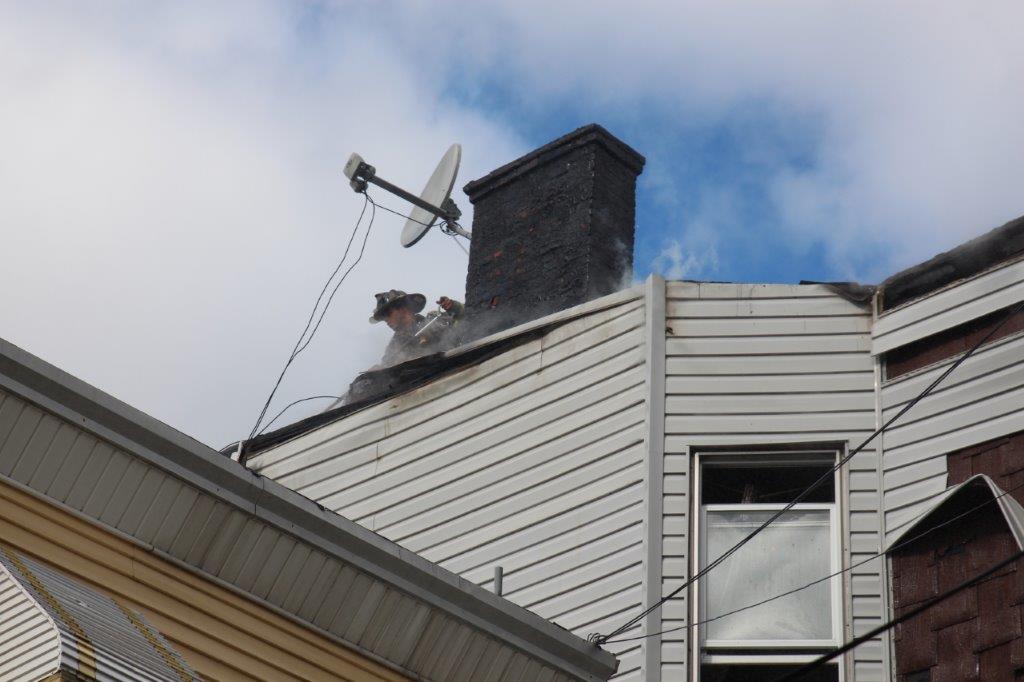 By Ron Jeffers.- After a period of heat and humidity, the weather took a turn with falling temperatures and winds on October 21st.  With the temperature hovering around 50-degrees, and  wind gusts up to 40-mph, city firefighters met a challenge in an occupied three-story wood-frame dwelling in The Heights section

A full first-alarm assignment was dispatched to 1004 Summit Avenue at 1:21 p.m. for a reported fire.  Third Battalion Chief Robert Forenza pulled up and reported smoke showing from the rear of the building.  Crews found fire in the rear on the bottom floor and radioed to command that the fire could be in the walls of this balloon wood-frame structure, and to have the upper floors inspected for extension.

As fire was believed to be racing up the walls a second-alarm assignment by Deputy Chief DellaRosa, at 1:39 p.m.

Ladder company members began making inspection holes and flames were located up all floors and into the cockloft common space area of the roof.  A third-alarm was sounded at 1:45 p.m., followed by a fourth alarm at 1:51 p.m.  Numerous hand-lines were used to extinguish the flames from the interior and an outside hose line was employed to protect an exposure from a rear yard.

Fifteen residents were displaced by the blaze.  Many of them were standing in the chilly wind with a few possessions during the battle.  Representatives of the American Red Cross arrived to assist the victims.

The fire was declared under control at 2;08 p.m., as city fire investigators began to examine the scene and interview occupants.

The Gong Club canteen truck was also on hand as part of the rehab operation.