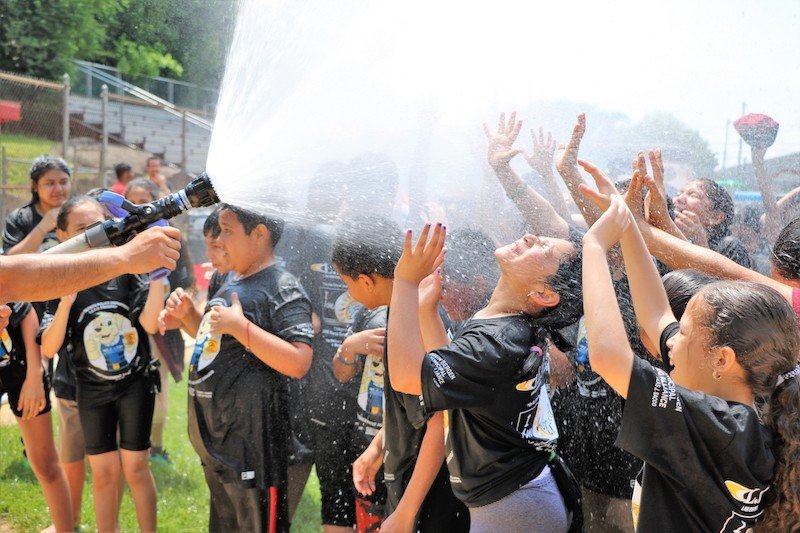 Nearly 600 kids from all of North Bergen’s elementary schools held an outdoor party on May 30 to celebrate their graduation from the L.E.A.D. program. L.E.A.D. (Law Enforcement Against Drugs) is designed to educate youth about the dangers of drug use and to promote healthy, safe lifestyles.

All fifth grade students in North Bergen participated in the program and were rewarded with a day of games, entertainment, snacks, and much more. The event took place at 64th Street Field, where the kids spent the day engaging in games, sporting challenges, rock climbing, a dunk tank, and general fun. Among the highlights of the event were a raffle for half a dozen bicycles and helmets, and an impromptu rainstorm courtesy of North Hudson Regional Fire and Rescue’s firehose.

“Officer Joe” Sitty, who runs the L.E.A.D. program in North Bergen, served as emcee, introducing entertainers including popular singer Lori Michaels, who led the crowd in a spirited all-singing, all-dancing version of her hit, “Reach Out.” Also performing were dancers Eleanee Jimenez from Peak Latin Dancing; Amy Romero from Lisa Lisa’s backup troupe; activist, poet, and Ballroom BASE founder Olivia Summer Hutcherson; and NBHS sophomore Celeste Maneiro, direct from a performance the night before on NBC’s World of Dance.

Mayor Nicholas Sacco kicked off the event by congratulating the graduates and inviting them to enjoy their day of fun. Joining him were numerous township officials, including Commissioners Hugo Cabrera, Julio Marenco, and Allen Pascual, Deputy Police Chief Peter Fasilis, and School Superintendent Dr. George Solter.

The L.E.A.D. program is funded by the Governor’s Council on Alcohol and Drug Abuse, the North Bergen Board of Education, and the North Bergen Police Department, with contributions from the PBA. Student volunteers from the high school and eight grade manned the attractions and provided assistance throughout the day.