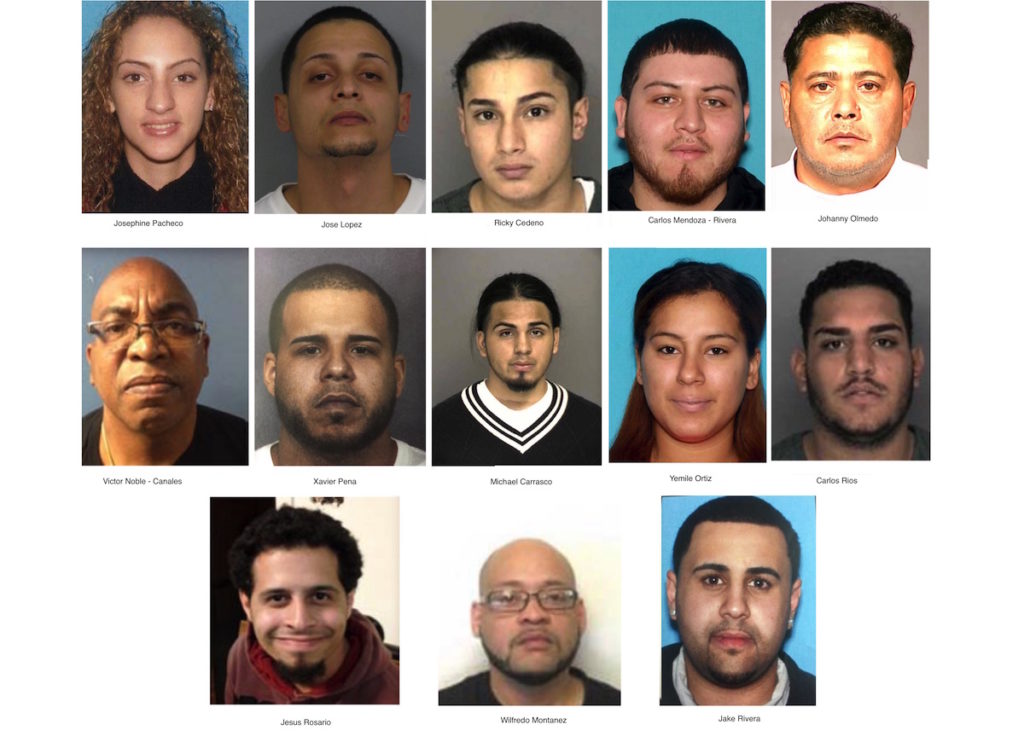 Hudson County Prosecutor Esther Suarez announced today that 13 individuals were arrested in connection with a multi-state, large-scale narcotics organization based out of Hudson County.

The investigation was initiated in January 2016, after information was received that Carlos Rios headed a local organization alleged to be acquiring kilogram-quantities of cocaine being shipped to the continental United States by Victor Noble-Canales, a suspected Puerto Rico-based supplier, via the United States Postal Service from Puerto Rico to various destinations in the New Jersey/New York area. Rios then allegedly utilized several associates, including Ricky Cedeno and Michael Carrasco of Union City, New Jersey, as well as Xavier Pena of the Bronx, New York in obtaining those packages upon their arrival in the Hudson County area. Also identified as part of the organization were Josephine Pacheco and Yemile Ortiz, who are believed to have participated in laundering illegal proceeds derived from the distribution of cocaine.

On April 21, 2016, members of the Caribbean Division of the Drug Enforcement Administration and the United States Department of Homeland Security in San Juan, Puerto Rico arrested Noble-Canales at his residence in San Juan, Puerto Rico. A subsequent search of Noble- Canales’ residence led to the seizure of a 9mm handgun, a large sum of United States currency, as well as a large quantity of cocaine and marijuana.

During the course of the investigation, over seven kilograms of cocaine with an estimated street value of over one-quarter of a million dollars were seized by the Hudson County Prosecutor’s Office and members of the United States Postal Inspection Service and the New Jersey Drug Enforcement Administration, which are connected to Rios, Noble-Canales and their organization. Over $180,000.00 in currency and bank accounts was also seized.

The following is a list of individuals arrested and their respective charges and bails:

Prosecutor Suarez said, “This organization channeled substantial amounts of cocaine into our Hudson County community and relied on a sophisticated network spanning from Union City to Puerto Rico. The investigation delved beyond the mere street-corner dealer and focused on the commerce of suppliers and financiers in this illegal trade. This take-down was the culmination of a concerted and arduous effort of over one dozen law enforcement agencies. Getting these dealers off our streets is a step toward further protecting our residents and families. Even if our work needs to be done one drug dealer at a time, these arrests help take drugs and guns off our local streets.”

The above charges are merely accusations, and the defendants are presumed innocent until proven guilty. R.P.C. 3.6(b)(6).