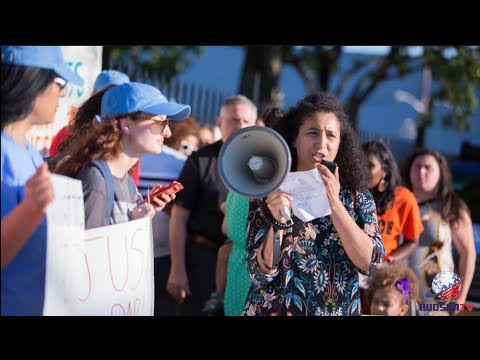 They are a coalition of Hudson County residents who came together to take a stand against what they feel is the injustice towards immigrants and created Hudson for All.

Members hail from NJ-08 for Progress, Hudson CAN, ACLU, American Friends Service Committee and Hudson Civic Action. They are concerned about 287g and want to see it end.

“It just came to the point where our neighbors were being targeted.”

And really freaked out by raids.

“Immigrants are human beings and they’re not being treated as such,” says Nadja Rutkowski, of Hudson For All.

“We are a very Democratic blue county, yet we still have one of the most backward immigration policies in the whole country,” Stern Weber says.

“There are cases of people being detained for over a year because they can’t afford an attorney. So one is not provided for them under a civil immigration offense,” says Steve Ramshur, founder of Hudson Civic Action.

The debate over 287g has grown more contentious than ever and for those who want to put an end to it, many things about the agreement are troubling.

“Lack of regard for the unintended consequences,” Stern Weber says.

According to U.S. Customs and Immigration Enforcement, the 287g program is one of ICE’s top partnership initiatives. It allows a state or local law enforcement entity to enter into a partnership with ICE, under a joint Memorandum of Agreement (MOA), in order to receive delegated authority for immigration enforcement within their jurisdictions.

According to local civic groups, no one intended that four-year-olds would be standing in front of immigration judges.

“Without their parents and without right to counsel,” Stern Weber says.

“No one intended for the wrong person to be picked up by ICE and then die in Hudson County Correctional Facility.

“But the real issue is that when we brought it up, the indifference was startling.”

Nadja says she has not been treated like a human being many times going through airport immigration.

“My parents as well having been denied re-entry into the country after living here legally for over 20 years,” Rutkowski says.

Undocumented members of the community say they are afraid to call the police— if there’s a robbery,  if there’s a rape.

“Phone calls to the police in Latino communities are way down; 287g agreement and ICE’s activities erode the trust that local law enforcement have been trying to build,” Ramshur says.

“It makes the job of local law enforcement harder and it’s a hard enough job as it is.”

Human rights activists and other experts say the immigration system is broken and it needs to be fixed.

“Getting rid of 287g that we can get a free and welcoming Hudson County is just a small step in the grand scheme of things, but it’s a start,” Rutkowski says.

“Thomas DeGise, he could end the 287g agreement with a one sentence letter to ICE and it would immediately be over,” Ramshur says, adding that he’d like the County Executive to be wiling to have a conversation with local advocates.

We reached out to DeGise, but he politely declined an on-camera interview. His spokesman provided me with a brief statement regarding the long term Democrat’s stance on 287g:

“The only County employees involved with the 287g program are one corrections officer per  8-hour shift at the jail— three in total.

They are responsible for flagging individuals from foreign countries who are arrested by local police in our community for serious crimes requiring bail, such as: sexual assault, violent crimes, crimes involving weapons or gang activities, and then brought to jail to be held for trial.

Corrections officers work exclusively inside the jail and consequently do not take part in any immigration related enforcement activities in the community.

The County’s participation in the 287g program in our jail is for one reason only: to get dangerous criminals off the streets and out of the country.

We remain fully supportive of national comprehensive immigration reform that includes a pathway to citizenship for all immigrants—but we cannot look the other way when it comes to protecting the very immigrant communities in Hudson County we serve who are preyed upon by those flagged after arrest for serious violations of the law. Our very limited participation in 287g in our jail accomplishes this objective.”