A man armed with a knife broke into a Jersey City resident’s home Wednesday, then fled. 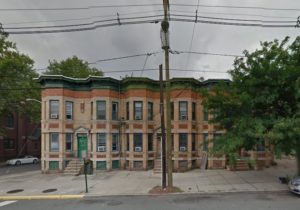 Kendall De La Cruz Lopez, 30, says he was in the bathroom when he heard someone knocking multiple times on his apartment door on Kennedy Boulevard.  So he went to answer, but found no one outside.

He returned to the bathroom and once done, encountered an unknown male inside the apartment who claimed he was there to see a friend, “Miguel” who owed him money.

Lopez knew the man was lying because there was no “Miguel” living at that address.

During the discussion, Lopez says he saw the man brandish a long curved knife with a black handle in his right hand, putting Lopez in fear for his safety — so he punched the suspect in the face.

That caused the man to lose his balance and fall backward while still holding the knife, which scratched the bedroom door.

The man was described as light skin Hispanic, about 6’0,” with long hair in a ponytail, wearing a red t-shirt, jean shorts and sneakers.

Later that evening, Orlando Torres was arrested and charged with burglary, possession of  a weapon for unlawful purpose/other weapons, possession of weapon – other  and aggravated assault with a deadly weapon.

The 23-year-old also had two open warrants out of Jersey City.

The black knife was never recovered.