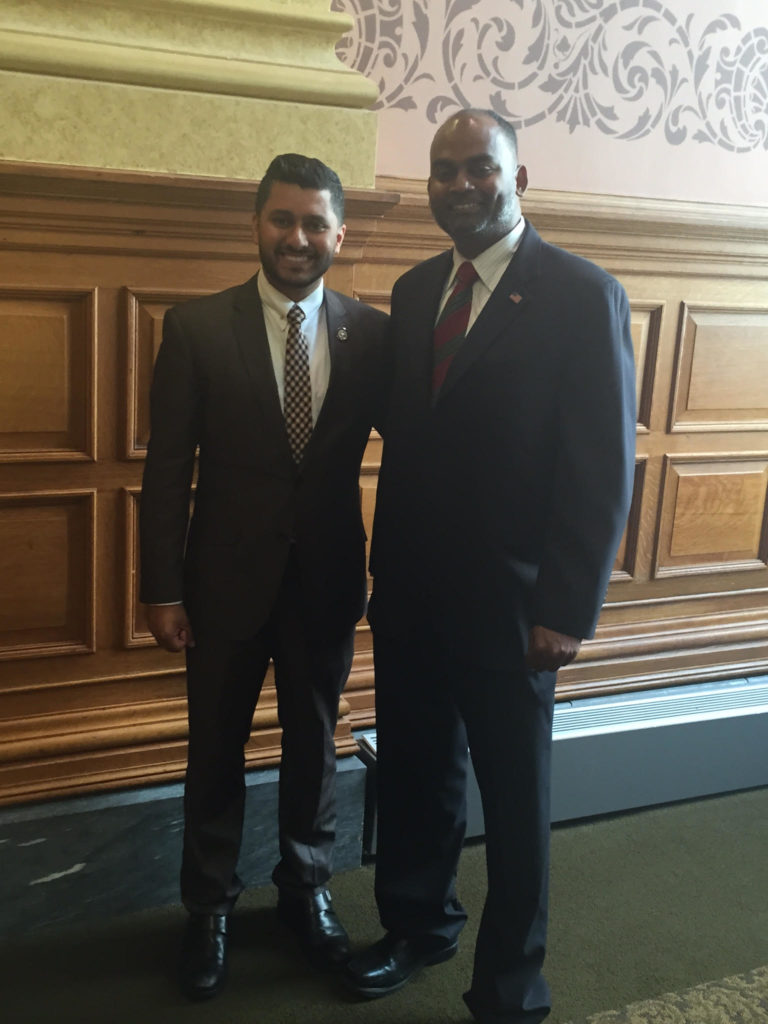 “The children of Jersey City need bold leaders that will break through the gridlock…Sudhan Thomas is the right person at the right time for Jersey City.”

Assemblyman Raj Mukherji, the state’s only South Asian legislator, made a pioneering step in becoming the first elected official to publicly endorse the candidacy of Sudhan Thomas for Jersey City Board of Education in a crowded thirteen-candidate race.

According to Mukherji, “The children of Jersey City need bold leaders that will break through the gridlock and fight for their futures. Sudhan Thomas is the right person at the right time for Jersey City. He is a parentand a business professional who has been active in the community,championing various initiatives over the last two decades. He represents a new generation of leadership that Jersey City desperately needs to address the challenges we face in urban public schools.”

“We are honored to receive the endorsement of Assemblyman Mukherji, who has been a champion for urban schools in the State Legislature as a member of the Budget Committee,” said Thomas. “The time has come to take control of our destiny and establish full local control in the Jersey City school district. Now is the time to end the gridlock and initiate a progressive agenda in our schools. It is troubling that some Jersey City children attend school in trailer classrooms, without basic school suppliesand infrastructure. Our parents and teachers, the primary caregivers and educators of our children, need to be supported with comprehensive programs. Our campaign has immensely benefited by meeting hundreds of constituents over the last few months, and our platform will continue to be shaped by listening to our constituents. We look forward to working closely with Assemblyman Mukherji to return greatness to the Jersey Citypublic schools.”

Mukherji urges city residents to stand up to gridlock and elect Sudhan Thomas to the JCBOE on Tuesday, November 8, 2016. Mukherji’s support comes at a critical juncture for Jersey City schoolchildren, with local control returning after decades while current Board members struggle to find common ground.

An effective champion for Jersey City, fifty-two bills of which Assemblyman Raj Mukherji was primary sponsor were signed into law during just his first term in the State Legislature. A lawyer and healthcare entrepreneur, he previously served as Deputy Mayor of Jersey City and sold a successful information technology company at the age of 17 in order to enlist in the U.S. Marines two weeks after the September 11th attacks, serving in military intelligence. A public educator and proud member of American Federation of Teachers (AFT) Local 1839, he teaches Constitutional Law as an Adjunct Professor at New Jersey City University. Mukherji is presently the only Asian American and the only former Marine in the New Jersey General Assembly.

Sudhan Thomas is a successful business professional in the financial industry and a longtime resident of Jersey City. He lives with his two-year-old son in Jersey City’s Ward A. He previously served as Secretary of the Newport Neighborhood Association, where he championed several civic projects including urban park space and traffic initiatives. A single father, Thomas spends 18 days at home full-time with his son and works the remaining 12 days through a flexible work arrangement. Thomas is one of 180 certified 9/11 historian docents who educates visitors at the National September 11 Memorial & Museum, where his work has impacted millions of visitors and students. He has also been actively involved in supporting veterans and LGBTQ equality.