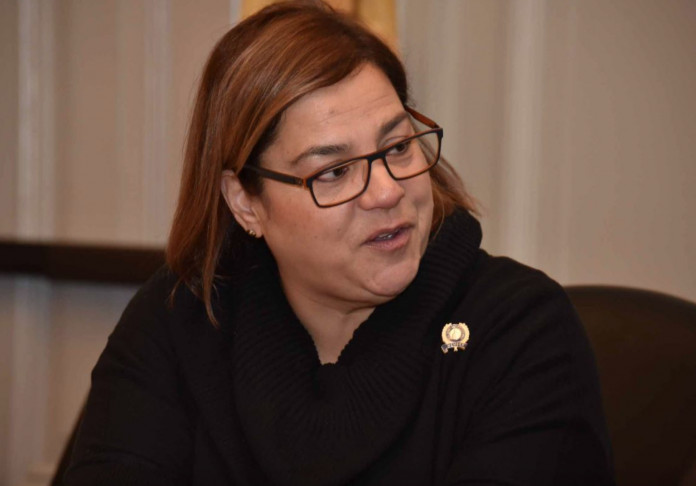 32nd District, Democratic Assemblywoman Angelica Jimenez will run for a West New York Commission seat on incumbent Commissioner Cosmo Cirillo’s West New York Forward ticket in the upcoming municipal election in May, 2023.  Jimenez becomes the second announced candidate to join Cirillo’s team, the other being current West New York Commissioner Margarita Guzman, as Cirillo looks to defeat outgoing Congressman Albio Sires for the Mayor’s Office.  Sires, who has the complete backing of the Hudson County Democratic Organization, will officially announce his candidacy for Mayor when his Congressional term ends in January.

Jimenez, whose time in the State Legislature appears to be drawing to a close due to this year’s redistricting, which will move West New York from the 32nd to the 33rd District, said in a statement,  ““I am very honored to represent not only the Town of West New York, but the entire 32nd Legislative District, in the New Jersey General Assembly.  I entered public service because I wanted to help people and give back. I am proud to have served as Vice-Chairwoman of the WNY Housing Authority and Vice-Chairwoman of the WNY Board of Education, as a volunteer to both boards. I was also the Vice-President of the WNY Women’s Club, a non-profit organization that helped with many charitable causes throughout the years.

It is clear to me that at this moment in time, the best way to help my community is to dedicate myself to the town I have called home for over 52 years. I have seen many changes take place during this time and truly believe that we need to move our community forward and not backwards.”

She went on to say, “Cosmo offers our community many innovative ideas and a vision that will help our town thrive. We have worked closely together throughout the years and I know he has the drive and dedication to make WNY the best it can be. I am happy to officially endorse him to become our next Mayor and am proud to join him and Commissioner Margarita Guzman as part of the West New York Forward Team.

As an American of Cuban descent, longtime homeowner, and the mother of two children who grew up here, one of whom serves our community as a police officer, I have no doubt that the West New York Forward Team will put in the hard work and place the needs of our residents first.”

Commissioner Cirillo issued this statement with regard to Jimenez’s endorsement and candidacy on his West New York Forward Team, “Assemblywoman Jimenez has proven herself to be an unwavering leader and champion in the State House for her constituents.  I am truly humbled to have her support and to welcome her on the West New York Forward Team.  She has demonstrated herself to be an efficient legislator and is respected by her colleagues who have risen her to the rank of Deputy Speaker and Chairwoman of the Human Services Committee.  She has been a vocal advocate for New Jersey families by helping to pass legislation that provides employees with time off for events regarding the education of their children, as well as fiercely advocating for the nurse-to-patient ratio to change in the state.  As a passionate supporter of mental health initiatives, she was awarded the 2020 Legislator of the Year Award by the NJ Psychological Association.  Most recently, she is the Prime Sponsor of two out of a five-bill package to combat homelessness within New Jersey.  Locally, I am personally thankful to Assemblywoman Jimenez for her assistance in helping to secure a $12.5 million grant from the State for the development of a brand new public library for the Town of West New York.  These are only a few of her amazing accomplishments on behalf of the residents of West New York and the State of New Jersey.  It is without question that her experience at the state level and her passion for our town will help move West New York in a positive direction forward.”

West New York Mayor Gabriel Rodriguez will not be seeking re-election.  He is one of two, Assembly running mates with Senator Brian Stack in the new, although not yet “doing business” 33rd Legislative District.  The other is North Bergen Commissioner Julio Marenco.  The Primary Election is in June.

Should Jimenez be successful and win a Commission seat, she would have to resign her Assembly seat on July 1, 2023, forcing a special election convention to fill the final six months of her term.   That contest would be run under the legislative boundaries of the 32nd District and not the newly drawn 33rd District.