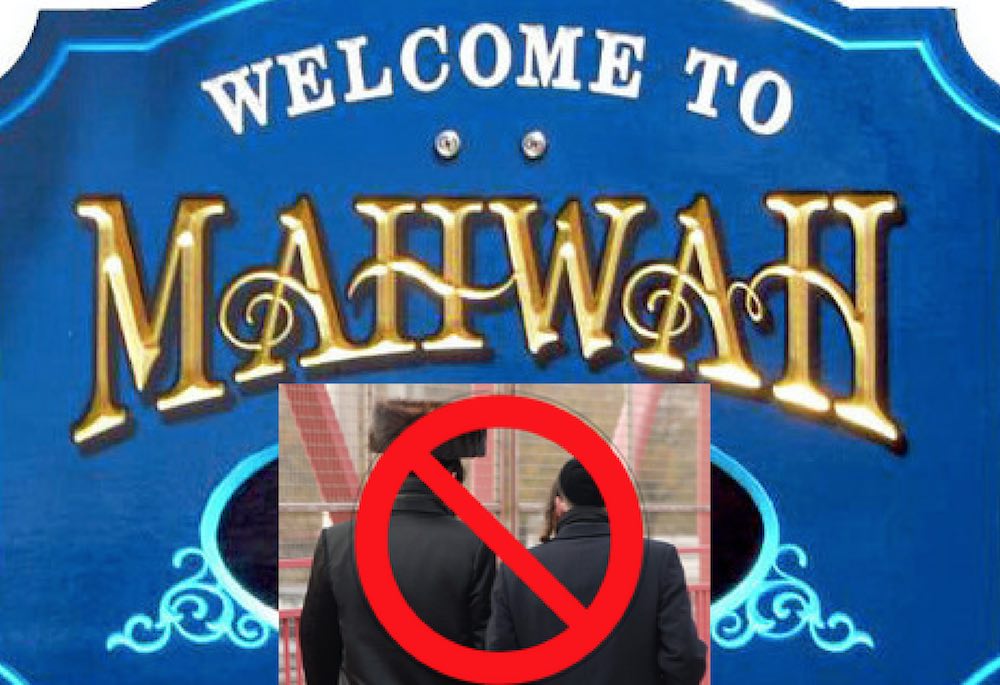 TRENTON – Likening the conduct of Mahwah township officials to 1950s-era “white flight” suburbanites who sought to keep African-Americans from moving into their neighborhoods, Attorney General Christopher S. Porrino announced today that the State has filed a Superior Court complaint against the Mahwah Township Council and the Township of Mahwah alleging that, in an effort to stave off a feared influx of Orthodox Jewish persons from outside New Jersey, it approved two unlawfully discriminatory ordinances.

One of those ordinances discriminated by banning non-New-Jersey-residents from using Mahwah’s public parks, the State alleges. The other – an ordinance amendment – discriminated by effectively banning the posting, on utility poles, of plastic strips called “lechis” that denote the boundaries of an eruv used by Sabbath-observant Orthodox Jews. The complaint also challenges actions the township has taken to have an existing eruv removed.

Filed in Superior Court in Bergen County, the State’s nine-count complaint is filed on behalf of Attorney General Porrino, the Division on Civil Rights, Commissioner Bob Martin and the New Jersey Department of Environmental Protection (DEP). It charges that the township council, influenced largely by vocal anti-Orthodox-Jewish sentiment expressed by some residents at public meetings and on social media, engaged in unlawful discrimination aimed at halting an unwanted “infiltration” by Orthodox Jews – particularly from neighboring Rockland County, NY.

In addition to charging discrimination, the State’s complaint notes that Mahwah Township has applied for and received more than $3.4 million in DEP Green Acres grants – money the lawsuit filed today seeks to reclaim – for purchase and maintenance of its parks, and that Mahwah’s ordinance banning non-New-Jersey residents from using those parks is a direct breach of its Green Acres funding contracts.

“In addition to being on the wrong side of history, the conduct of Mahwah’s township council is legally wrong, and we intend to hold them accountable for it,” said Attorney General Porrino. “To think that there are local governments here in New Jersey, in 2017, making laws on the basis of some archaic, fear-driven and discriminatory mindset, is deeply disappointing and shocking to many, but it is exactly what we are alleging in this case. Of course, in this case we allege the target of the small-minded bias is not African-Americans, but Orthodox Jews. Nonetheless, the hateful message is the same.”

DEP Commissioner Bob Martin said it is “regrettable” that Mahwah appears to have made a concerted effort to block non-New-Jersey- residents from using its public parks, which are subject to Green Acres restrictions as a condition of Green Acres funding to Mahwah.

Martin noted that, as the State lawsuit filed today makes plain, the Green Acres Act provides that use of any lands acquired under the program is not to be restricted on the basis of religion or residency.

“The Green Acres Program was created in 1961 and envisioned as a way to meet the recreation and conservation needs of our growing state. It was intended to ensure that in the future, there would always be plenty of open spaces across New Jersey for people – all people – to enjoy,” said Martin. “What’s been happening in Mahwah with respect to the township’s parks ordinance is not in accordance with the original intent of the Green Acres Program. As such, it is unacceptable, and it cannot be allowed to stand.”

Attorney General Porrino said Mahwah’s council members should be setting a better example than to entertain – and act under the influence of – public comments rife with hate and bias.

“Our public officials are sworn to respect and uphold the rule of law, to set an example and represent all citizens – not just those with the loudest voices,” said Porrino. “No person should need to hide his or her religious faith to live, work, or enjoy a local park. Likewise, local government should not be interfering with the exercise of religious freedom, as we allege Mahwah has attempted to do with its ordinance amendment effectively banning eruv markings. Through our lawsuit, we seek to have these illegal, bias-driven actions nullified.”

In addition to seeking statutory penalties and attorney’s fees and costs, the complaint seeks return of all Green Acres funding awarded Mahwah. It also asks the Court to grant preliminary and permanent injunctions blocking the two Mahwah ordinances alleged to be discriminatory.

The State’s complaint explains that an eruv is a designated geographical area within which Jews who hold certain religious beliefs may push or carry objects – such as a stroller, wheelchair, keys or identification – during the Sabbath (Friday evening to Saturday evening) and during the Jewish holiday of Yom Kippur.

For those who hold these beliefs, the complaint notes, the act of pushing or carrying objects on the Sabbath or Yom Kippur is permitted only inside the home or within the confines of a properly established eruv. An eruv is commonly created by affixing thin plastic strips known as lechis to utility poles to mark the boundaries of the area.

In 2015, the Bergen Rockland Eruv Association sought to extend an existing eruv in Rockland County, NY, to cover the full southern part of Rockland County. The proposed path of the extension included areas within a portion of Mahwah Township near the New York border.

The State’s complaint alleges that, despite approval of the posting of lechis on its utility poles in Mahwah by Orange & Rockland Utilities – and despite the township having struck a formal agreement to ensure security and traffic control by Mahwah Police in May 2017 while the posting work went on – the township council forged ahead in July 2017 and approved an illegal amendment to its sign ordinance effectively banning lechis on utility poles.

As amended, the sign ordinance – which previously banned simply “signs” on utility poles – now included expanded language prohibiting the posting of “any … device or other matter” on a utility pole, shade tree, lamp post, curbstone, sidewalk, or upon any public structure or building in Mahwah.

A month after initiating efforts to amend the sign ordinance language, the council voted to authorize Mahwah’s zoning officer to issue summonses against the Bergen Rockland Eruv Association for violating the existing ordinance. The State’s lawsuit observes that, prior to the sign ordinance being amended, the Eruv Association had worked cooperatively with Orange & Rockland Utilities, the Mahwah township administration and the Mahwah police department in creating the eruv.

With respect to the ordinance banning non-New-Jersey-residents from Mahwah parks, the State’s complaint alleges that on June 8, 2017, all seven township council members voted in favor of the measure upon its introduction.

At a subsequent public hearing on the ordinance – on June 29, 2017 – the council members heard comments from members of the public in attendance, and also received comments from residents by way of e-mail and social media.

The complaint notes that many of the public comments offered were “overtly anti-Semitic” in nature, and that around the same time, Mahwah Police began receiving “multiple calls” from residents reporting that people who appeared to be Orthodox Jews were using the parks, although the callers did not allege any problematic conduct.

The complaint also notes that, upon approving the parks ordinance, the township created proposed signs for posting in its parks explaining that the facilities were only open to New Jersey residents, but including such disclaimers as “GUESTS OF A RESIDENT ARE PERMITTED USE” and “EMPLOYEES OF LOCAL BUSINESSES ARE PERMITTED USE.”

In addition, the State’s lawsuit recounts that, in an e-mail sent to Council President Robert Hermansen, a Mahwah resident who is not of Orthodox Jewish faith expressed concern that her mother – a New York resident – would not be able to take her grandchildren to Mahwah’s parks. Allegedly, the council president replied that the grandmother had nothing to worry about, and that the ordinance banning non-New-Jersey residents from Mahwah’s parks was not intended to address her situation.

Among other things, the complaint filed today alleges – in separate counts – that the Mahwah parks ordinance and the amended sign ordinance represent abuses of municipal power by the Mahwah township council, in violation of the First, Fourth and 14th Amendments of the U.S. Constitution.

For example, the lawsuit contends, enforcement of the ban on non-New-Jersey residents using Mahwah parks would inevitably require Constitutional over-reach by Mahwah police officers seeking to determine if an individual observed using the park resided in Mahwah. Specifically, the complaint contends, police officers – absent evidence of any suspicious or unlawful conduct by the park user — would have to approach the person and require him or her to provide appropriate documentation in order to remain in the park.

“Each instance of enforcing the (parks) ordinance will subject affected persons to an unreasonable search,” the complaint asserts.

Also, in addition to counts alleging that Mahwah’s amended sign ordinance banning eruvs is unconstitutional, the complaint charges that it is tantamount to housing discrimination.

Specifically, the complaint says, a ban on eruvs – or threats of being issued summonses and fines for not removing the lechis that demarcate eruvs – would interfere with the ability of observant Orthodox Jews to live in Mahwah, thereby denying them housing on the basis of religion.

“This is an extensive complaint that lays out a variety of serious allegations and a number of legal theories, but the bottom line is very simple – the township council in Mahwah heard the angry, fear-driven voices of bigotry and acted to appease those voices,” said Attorney General Porrino.

“Our duty is to uphold the law, even when the fight might be unpopular and regardless of whether we have the winds of protest or political favor at our backs,” Porrino said. “Our message to those public officials in Mahwah who are leading or following this misguided charge is meant to be loud and clear: We intend to hold you accountable. Our message to local officials in other towns who may be plotting to engage in similar attempts to illegally exclude, is the same: We will hold you accountable as well.”