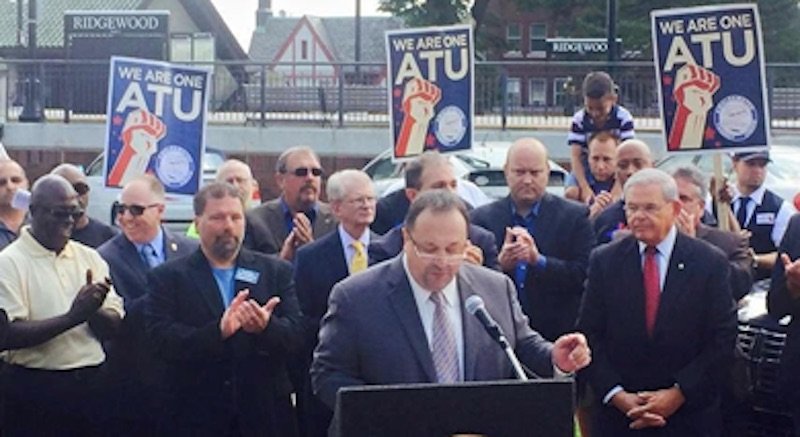 “I am thrilled to have the endorsement of the dedicated, hardworking men and women of Amalgamated Transit Union who keep our mass transit system running and their riders safe,” said Sen. Menendez.  “I have spent my entire career fighting for the resources needed to improve and expand our transit systems that attract businesses and residents, grow our local economy and create jobs.  I have stood up for the rights of workers and for policies that expand the middle class in New Jersey.  The stakes in this election have never been higher and I am proud to have the men and women of ATU standing with me in that fight.”

“Bob Menendez has been a true friend of NJ Transit workers for more than 30 years.  He’s been a key ally of the Amalgamated Transit Union (ATU) since being elected Mayor of Union City in 1986.  Through his time in the U.S. House and now in the Senate, he has come through for us time and time again,” said ATU Chairman Ray Greaves.  “As the former chairman, and now top Democrat, on the key Senate Subcommittee that oversees transit, he stood up for workers when others tried to force our work to be privatized.  He’s fought for record transit funding, and now he is sponsoring critical legislation to protect transit workers from assault and safeguard pedestrians from being run over by poorly designed buses.  He never stops fighting for us.  ATU proudly endorses Bob Menendez for reelection to the U.S. Senate, and we will work hard to ensure that he gets to carry on his important work in Washington.”

As the Ranking Democrat on the Senate’s mass transit subcommittee, Bob Menendez has delivered record federal funding to expand mass transit and improve New Jersey’s aging infrastructure. Sen. Menendez secured more than $1 billion in federal funding to build and expand the Hudson Bergen Light-Rail, which has spurred economic development, created jobs and improved quality of life.  Sen. Menendez has fought tirelessly to retain funding for NJ Transit, including pushing back when Senate Republicans tried to strip New Jersey of $50 million a year in transit funding.  He is a staunch supporter of the Gateway Project and secured $541 million to keep it moving forward despite threats from the Trump Administration to shut down the government.  He actively pushes for investments in infrastructure to put construction workers back to work in New Jersey.

Bob Menendez has consistently and tirelessly fought for workers’ rights, pushed for paid medical, family and sick leave and to allow workers to organize without fear of retaliation.  The Senator supports collective bargaining rights and advocates for legislation to create job training programs.  He supports equal pay for equal work and is a champion for increasing the minimum wage.