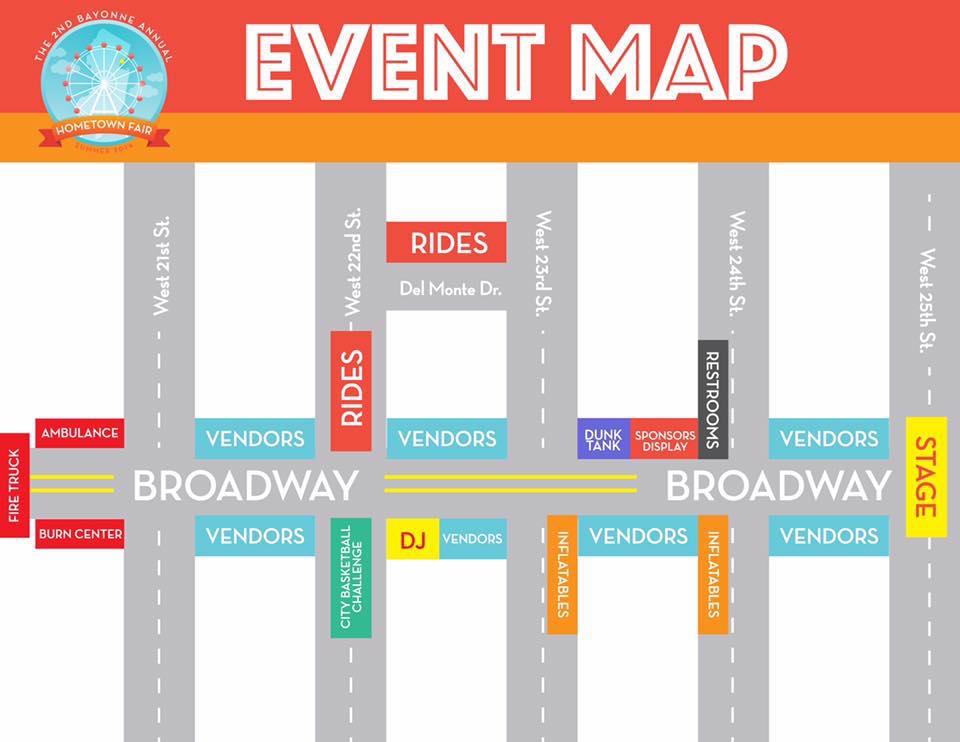 Mayor Jimmy Davis announced that the 2016 Bayonne Hometown Fair will take place on Saturday, June 11, and Sunday, June 12.  This will be the second annual fair in its current format.  The event was revived last year after an absence of several years.  On Saturday, the fair’s hours will be from 11:00 a.m. to 8:00 p.m.  On Sunday, the fair’s hours will be from 12:00 noon to 5:00 p.m.  The fair will be located along Broadway, from 21st Street to 25th Street, and on Del Monte Drive from 22nd Street to 24thStreet. The 2016 fair will feature food, games, rides, vendors, and musical entertainment.   Mayor Davis said, “Last year’s fair was a great success.  Dozens of organizations, businesses, entertainers, and volunteers are working to make sure that this year’s fair is even better.  I look forward to seeing everyone have a great time at the 2016 Hometown Fair.”

The stage for the fair will be set up at 25th Street and Broadway by McDonald’s Restaurant.

The opening ceremony for the fair on Saturday will take place at the stage at 11:00a.m.  The starting event will include a Boy Scout flag ceremony and a rendition of the National Anthem by Samantha Baez.

Musical acts and other performers will entertain from the stage on Sunday:

Shots, and The Detonators Band.

There will be various games at the fair to raise funds for local non-profit organizations.  Basketball Challenge will benefit the Bayonne Friends of the Handicapped.  Basketball Challenge will run on both Saturday and Sunday, and will be open to both children and adults who would like to try to make the most shots in a row.  A dunk tank will be available for non-profit organizations to use as a fundraiser.  Interested organizations should contact the Bayonne Urban Enterprise Zone (UEZ)

More than sixty vendors and organizations will take part in the fair, with tables along Broadway from 21st Street to 25th Street. The tables will feature food, merchandise, information about community organizations, and give-aways of various promotional items.

Police, fire, and medical vehicles will be available for visits by the public. A CarePoint Health van will offer free health screenings.

There is no rain date for the fair.  In the event of rain, every effort will be made to continue or resume the fair on the scheduled days, as circumstances may permit.