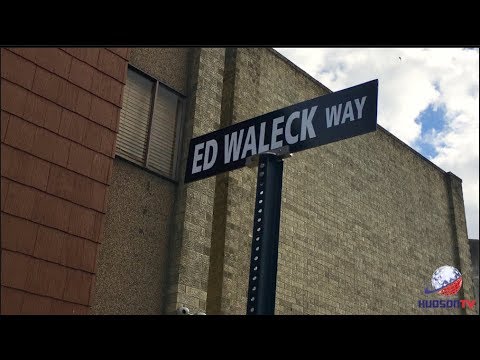 Longtime Union City man, Ed Waleck died in February but was honored Friday afternoon with a street in his name.

Family and friends gathered at the corner of 610 Palisade Ave. as it officially became ‘Ed Waleck Way,’ by proclamation of the city.

“I miss my brother and he dedicated his life to helping people, and this is a nice remembrance,” says Bob Waleck.

John Fiume, Jr. was a close friend of Ed Waleck’s for many years, known as the ‘Cat Man’ of Union City.

According to Cultural Affairs Director, Lucio Fernandez, “He’s a man that we believe is exemplary to our community and deserves this honor.”

“His level of compassion and caring, that was his way,” resident Joyce Fetterman says.  “And that’s why this is going to be Ed Waleck’s Way.”

“Instead of dropping it off at the Good Will we would give it Ed and he would distribute it to people that he knew would want that item or could need that item,” she says.

Ed’s caring nature and his contribution to the community was above and beyond.

“He was a diamond in the rough and they don’t come any better,” Fiume, Jr. says.

“He knew I used to wrestle and lift weights, so any newspaper article about wrestling or lifting weights would be right in my mailbox,” another resident says. “He just was a great guy and I really miss him.”

If you’re naming a street it would have to be after someone like Ed Waleck, who was so beloved by everyone in Union City.

“Especially the mayor, the mayor knew him for many years — almost his whole life,” Fernandez says. “A small token of our appreciation for the legacy left behind.”

Ed didn’t know everyone in the whole city.

“The city jumped right in, they were helpful and I can’t thank ‘em enough. This means a lot to a lot of people.”