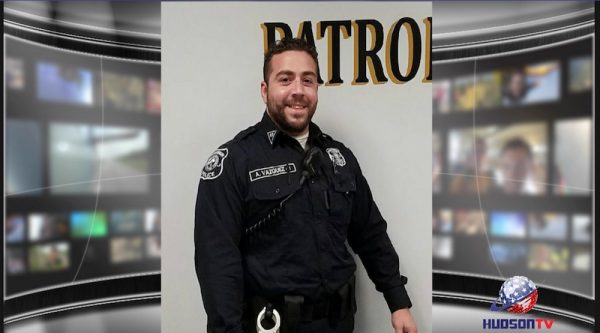 The North Bergen Police Department is reeling from a terrible tragedy. Sgt. Alex Vasquez has passed away.

Vasquez was fighting for his life for a few days after officers found him in his parked car Wednesday night with a self-inflicted gunshot wound to the head.

“North Bergen Police is with a heavy heart that we reflect on the fact that today we lost our friend, our brother, and our sergeant, Alexander Vasquez.

Alex was kind, caring and dependable. He always would greet us with a smile and back us with his strength.

There are no words that can accurately describe the sadness we are experiencing due to his loss. This tragedy has touched each of us in different ways.

May God have mercy on his soul and may Alex rest in eternal peace.”

“The entire department is in shock over the tragic event that unfolded late last night,” Chief Robert Dowd says.  “A good majority of the department was present both at the scene and at the medical facility throughout the night.

“We are all praying for Alex, his wife Natalie, their children, Alex’s parents and siblings during this trying time.

“I would like to thank the Hudson County Prosecutor’s Office, Hudson County Sheriff’s Office; the Jersey City, Hoboken, West New York, Union City and Fairview Police Departments for providing additional manpower and resources to the NBPD during this
crisis.”

Vasquez started his career in 2005 after graduating from the Passaic County Police Academy. He ranked second on the Sergeant Exam.

He is a highly decorated and professional police officer with more than 12 years of service, having worked as an officer both in the Patrol Division and the Detective Bureau.

Vasquez’s skills made him an asset to the FBI Violent Crimes Task Force, where he was on loan for an extended period of time.

He played a vital role in the high profile Millburn home invasion case. The former wrestler helped track down and arrest the suspect who brutally assaulted a mother captured on “nanny cam.”

Vasquez was also part of the department’s “Meet Your Officers” campaign, where he had the chance to interact with the community he was serving.

Mayor Nicholas Sacco is saddened by news of this incident.

“Alex Vazquez was a stand-out athlete and district champion wrestler for North Bergen High School,” the mayor says. “As a North Bergen Police Officer he is regarded by his peers as a leader and good friend to many in the department. I am praying for Alex and his family during this trying time.”

“Alex is more than just a member of the NBPD to me. I coached him in wrestling and I am proud to be personal friends with him and his family,” adds Public Safety Commissioner Allen Pascual. “The Chief and I were on scene last night and we are all here to support the Vasquez family in any way we can.”

The HCPO Homicide Division is leading the investigation with NBPD assisting.