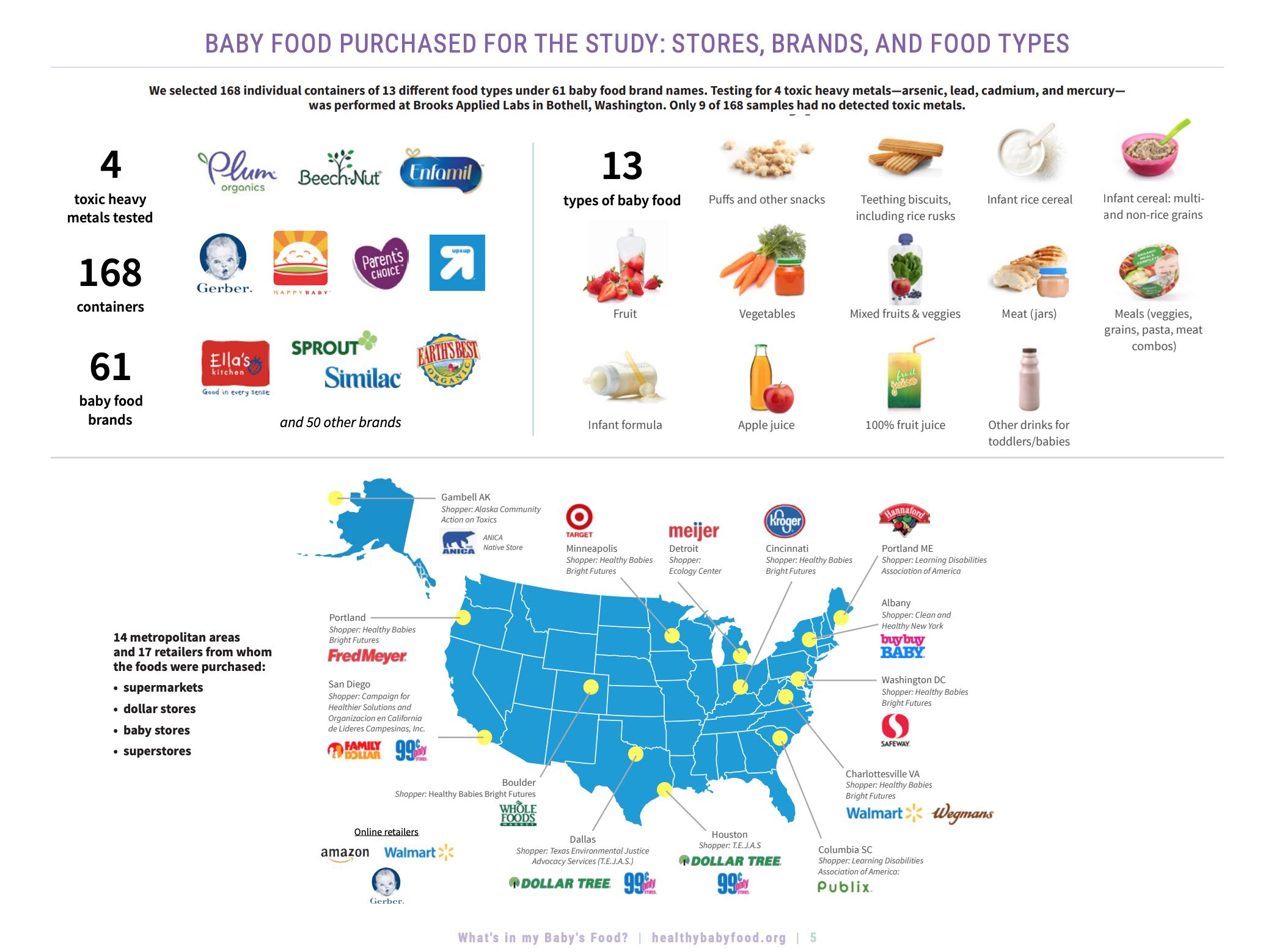 If you’ve ever found it challenging to get your bundle of joy to eat to eat that mishmash in a jar, you’re not alone. But now you have more to worry about than making sure they’re nourished — with the majority of baby food teeming with toxic heavy metals, a scary new study finds.

And those heavy metals are detrimental to your baby’s brain development.

The investigation focused on 168 name brand US baby foods, revealing that 95% contained lead, 73% contained arsenic, 75% contained cadmium and 32% contained mercury. All four heavy metals were found in one-fourth of the foods.

According to the National Institute of Environmental Health Sciences (NIEHS), scientists and pediatricians are increasingly concerned about the more subtle and long-range health effects of  infants exposed to arsenic in water and some foods, especially rice-based products, during sensitive windows of development.

1-ppb limit of lead, but no level of lead is safe, experts agree.

The results echoed those of the Food and Drug Administration, whose previous study found one or more of the same metals in 33 of 39 varieties of baby food tested, according to CNN.

“Even in the trace amounts found in food, these contaminants can alter the developing brain and erode a child’s IQ,” reads the report, commissioned by Healthy Babies Bright Futures, a consortium of non-profit organizations. “The impacts add up with each meal or snack a baby eats.”

The Healthy Babies study found four of seven rice cereals with the most toxic form of arsenic beyond the FDA’s proposed action level of 100 parts per billion (ppb).

“These popular baby foods are not only high in inorganic arsenic, the most toxic form of arsenic, but also are nearly always contaminated with all four toxic metals,” the report says.

Arsenic is a naturally occurring element and known human carcinogen found in soil, water and air.  A startling 2004 study of Bangladeshi children exposed to arsenic in drinking water revealed their intellectual test scores were considerably lower.

“A 50% increase in arsenic levels in urine would be associated with a 0.4-point decrease in the IQ of children between the ages of 5 and 15,” the report says.

And buying organic doesn’t make a difference. In fact, according to CNN — brown rice syrup, used to sweeten many organic foods, also contained significant levels of arsenic. Inorganic arsenic in an ‘organic’ milk formula for toddlers was six times the levels currently deemed safe by the US Environmental Protection Agency.

Pediatrician and author Tanya Altmann advises parents to offer a wide variety of early foods, including grains such as oats, barley, wheat and quinoa.

The doctor believes meats provide more iron and zinc for babies than rice cereal so she hasn’t been recommending rice cereal as a first food for a number of years.

So what’s a parent to do…

If you decide to do go the natural (non store-prepared food route) for your toddler, Healthy Babies recommends cooking rice in extra water and pouring it off before eating. They say it will cut arsenic levels by 60%.

While arsenic levels may be lower than a decade ago, at the end of the day name brand baby food companies and the FDA need urgently to step up because exposure is still far too high and children’s lives are on the line.

“We need the FDA to use their authority more effectively, and much more quickly, to reduce toxic heavy metals in baby foods,” Houlihan says.