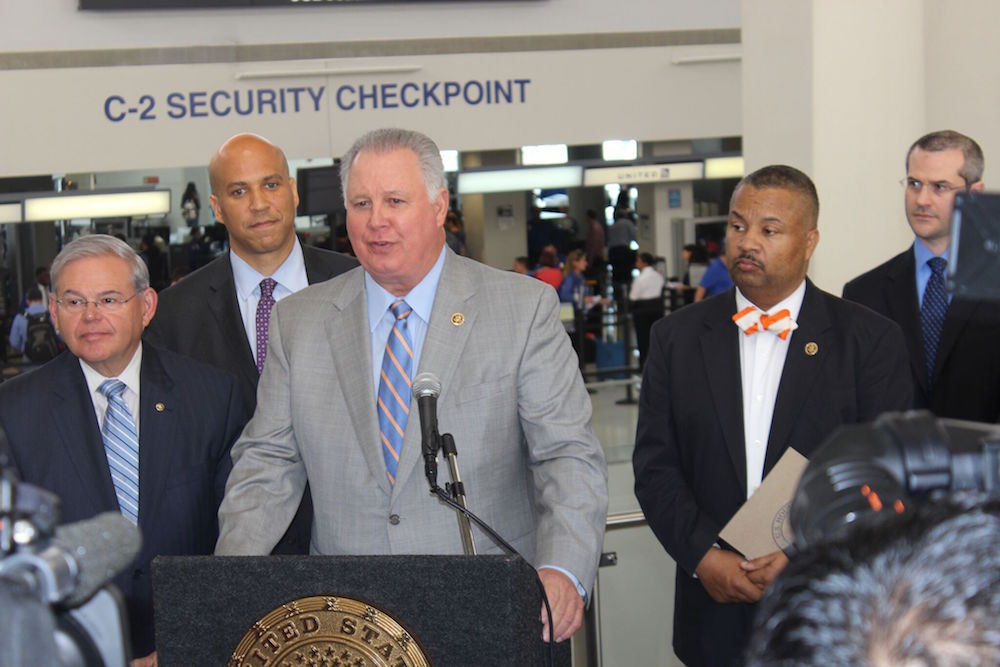 Following months of urging TSA to allocate additional resources to help alleviate onerous delays at Newark Liberty, the lawmakers announced that TSA heeded their call and deployed 25 agents this past weekend to Newark.  TSA will also be hiring 95 new agents by June.

The lawmakers also announced that TSA is authorizing eleven Passenger Screening Canine Teams and is working with United Airlines to open a PreCheck enrollment center in Terminal C.  Acceptance into PreCheck allows passengers who are pre-vetted as a low-risk to utilize an expedited screening process, resulting in fewer travelers in regular security lines.

“The outrageously long wait times we have witnessed in Newark not only slow down travel, but they also slow down economic growth for New Jersey and the region,” said Sen. Booker.  “I’m pleased to announce that TSA will be deploying officers right here in Newark, authorizing additional canine teams and opening a PreCheck enrollment center to allow more travelers to take advantage of this convenient program.  While these are positive steps towards helping address passenger delays, I want to see Congress and TSA provide even greater attention to Newark, including additional canine units and staffing in order to more effectively ensure traveler safety and move these long lines along quicker.”

“While tight airport security procedures are clearly necessary, we cannot accept travelers enduring unreasonable and excruciating, two-hour-long lines just to get through check points,” said Sen. Menendez.  “We have demanded assurances from TSA that it will provide sufficient resources and increased staffing to reduce these long waits– especially here at Newark-Liberty.  With the security enhancements we’re announcing today, it’s my hope that we can stop the insanity and make air travel safe, secure and easier for everyone.”

“With lines growing ever-longer at the nation’s commercial airports, I am pleased to stand here today with Senators Menendez and Booker, Congressman Payne and the TSA to announce new steps to help address growing security line delays at Newark Liberty International Airport,” said Rep. Sires.  “We have pressed TSA to address these insufferable wait times, passed additional funding through both Houses of Congress, and now it is my hope that the new resources coming on board here at Newark will improve conditions for the air travelers.”

“The growing security line delays at Newark Liberty International Airport are not only causing significant disruptions to travel plans for an increasing number of passengers, they are also putting more strain on already overworked transportation security officers,” said Rep. Payne, Jr. “The measures announced today will help alleviate long lines and wait times at the airport while still maintaining the strong security standards that are necessary to ensure the safety of the traveling public. I am proud to partner with my colleagues Senators Menendez and Booker and Congressman Sires on this issue and look forward to continuing our focus on security line delays.”

Of the approximately 95 new officers being hired at Newark Liberty, 23 are already receiving training at the national training center and could be deployed in the coming days. The 72 remaining new hires will receive training locally, which started on May 16th and will continue on May 31st.

In February, Sens. Booker and Menendez along with Congressmen Sires and Payne called on the TSA to address staffing issues at Newark Liberty International Airport amid significant delays at security check points during peak travel times, including unusually long delays this past holiday season.  In response, TSA committed to providing additional resources to Newark Airport, including directing TSA management to hire above their annual staffing allocation.

TSA funding has decreased by nearly $250 million since 2011 even though the number of passengers screened has increased. In 2015, TSA screened more than 708 million passengers – an increase of 40.7 million compared to 2014.

During a March hearing before the Senate Committee on Homeland Security and Government Affairs regarding the Homeland Security Department’s budget for fiscal year 2017, Sen. Booker questioned Department of Homeland Security Secretary Jeh Johnson about long lines at security checkpoints at Newark Liberty Airport and requested a plan for reducing passenger wait time.