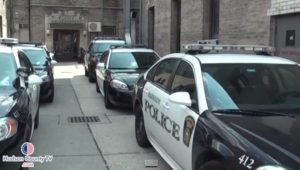 A thief made off with $1,350 worth of electronic equipment in an apartment burglary on Cleveland Avenue in Harrison.

Police say a 32-year-old man left his apartment at 7:52 pm and returned at 10:17 pm  to find his door pried open with visible signs of forced entry. The inside of the residence was also disheveled.

The victim reported stolen a 47-inch LG television valued at $1,000 from his living room and an Apple watch valued at $350, which he left on the nightstand next to his bed.

Officers canvassed the area and spoke to other Cleveland Avenue residents,  as well as immediate neighbors, but nothing suspicious was reported.

Harrison Police advised the victim to contact them if he discovered additional items.

The following day a burglar jimmied the lock on a Church Square residence, only to have the Harrison cop who lives there come home and arrest him.

According to Detective Corey Karas, as he walked out of his house his brother pulled up and noticed that the gate was unlocked.  He asked Karas if he left it open and the cop said, “No” but he also noticed the gate was open and the lock was missing.

Then Karas closed the gate and walked out of the alleyway, only to have the suspect open the gate and emerge with the lock in his hand.

Rolando Febles of Elizabeth was taken into custody, with a silver screwdriver in his waistband and a pair of work gloves.

He also had a black leather jacket in his possession.

When they found an Apple Watch on Febles, officers matched the serial numbers and realized they had their man — the one who robbed the Cleveland Avenue victim a day earlier.

Officers discovered damage to the rear slider door on the back patio of Karas’ home, and the moulding and door frame were pried with a tool.

There were pry marks up and down the sliding door where entry was attempted.

Febles was also wanted by the Essex County Sheriffs Office for burglary.

The 44-year-old was charged with Burglary and Possession of Burglary Tools.

Karas will be doing a follow-up on this case.