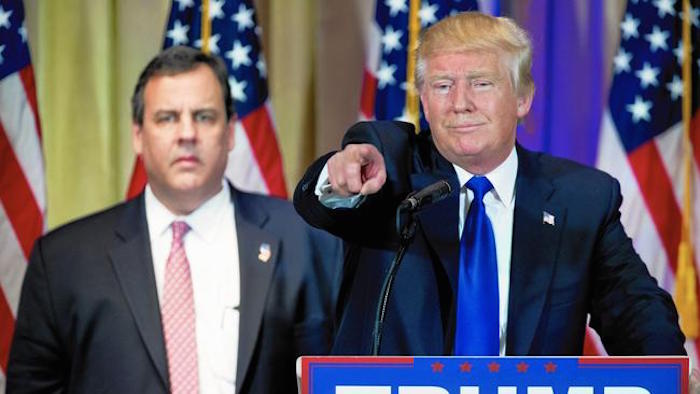 The general election is approaching. We ask the question: Does Donald Trump have a shot in New Jersey?

The current Republican governor, Chris Christie, is as unpopular now as he was popular after Sandy. That was four years ago. Now Christie spends a lot of time boosting Trump. This all points to advantages for the Democrats.

Are those advantages for Hillary Clinton? That’s the question we ask. On the ground, we hear no chatter for Hillary. We think the Democrats are all concerned about 2017 when the Governor is term limited.

There has to be a lot of drama in that statewide race. That’s the only way to  motivate people to support the candidates who supposedly are being backed by this fiefdom or that chieftain. Let us explain how this works.

There are four main contenders among the Democrats. There is Senate Majority Leader Steve Sweeney, Jersey City Mayor Steve Fulop, former U.S. Ambassador to Germany Phil Murphy and Assemblyman John Wisniewski. They have their varying regional constituencies and armies (except for Murphy who must depend on paid mercenaries). Their benefactors also carry the baggage of rivals and secret enemies who are looking to satisfy petty ambitions or settle scores, and will use the Governor’s race as a proxy war. The chances of the 2017 contenders depend on their armies, and so much intrigue behind the scenes. Game of Thrones has nothing on this crew.

Each of these proxy armies wants to demonstrate strength, in the hope of avoiding a real election battle next year which might reveal weaknesses which could invite very real local challenges in their home fiefdoms from which their warlords derive their real power (and paychecks). So the proxy battlefield for the first battle of 2017 (the June Democratic primary) is really this November.

That is why the proxy armies will compete. It’s all about showing strength in turnout now, the better to scare off future challengers in their own city-states, er, small towns.

Hillary? No one cares about her. But her opponent, Trump, will be so useful as a piñata.

Trump will motivate voters who otherwise would and do stay home. Those voters will turn out to vote down Trump (while many will also vote for him precisely as a reaction, canceling out the anti-Trump Republicans out there). The Democratic warlords will love this because it makes their motivational task so much easier than usual.

So ten weeks before the general election, it looks like the Democrats will crush Trump.

With his widow Laura and several of his five, young children in attendance on Monday morning, slain Jersey City Police Detective Joseph Seals’ memory was honored by the Hudson County Prosecutor’s Office, with the dedication of the Detective Joseph Seals Media Room on the 5th floor of the Hudson County Administration Building on Newark Avenue in Jersey City. Seals died in the line of duty on December 10, 2019, shot in Bayview Cemetery in Jersey City, in what was later determined to be a hate crime. ... See MoreSee Less

With his widow Laura and several of his five, young children in attendance on Monday morning, slain Jersey City Police Detective Joseph Seals’ memory was honored by the Hudson County Prosecutor’s Office, with the dedication of the Detective Joseph Seals Media Room on the 5th floor of the Hudson ...
View on Facebook
· Share
Share on Facebook Share on Twitter Share on Linked In Share by Email
View Comments