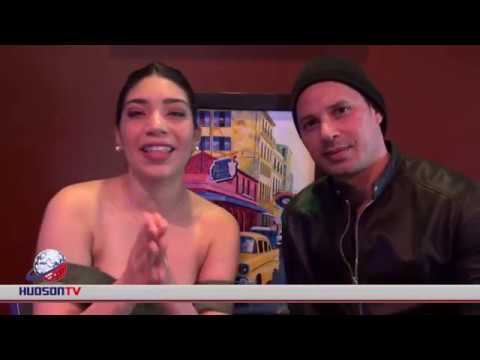 The young cuban singer-songwriter Leoni Torres visited New Jersey this past weekend making a stop La Havana 59 in Moonachie, considered one of the best Cuban restaurants in the State. Leoni’s visit coincides with his latest solo tour and in particular with concerts at ENVY Nightclub in Elizabeth and at SOB’s in NYC. Leoni felt right at home at La Havana 59, where owners Manuel Suarez and Edwin Ordoñes welcomed him and his entourage with open arms.

Leoni Torres is a vocalist, composer and producer, cataloged as one of the most important figures of Cuban music at this moment. He started his artistic career at a young age. After being a part of the group Costa Sur, from Camagüey, he caught the attention of David Calzado, who proposed to him in joining his famous group Charanga Habanera. In 2001 he joined the Charanga Habanera. During the eight years in which he was part of it he performed duets and projects with important figures of Cuban music. He achieved great success with hits like “Tiene de Cuba, tiene mela’o” and “Gozando y a lo cubano”. He toured the world with David Calzado’s group and recorded several albums. After some years, Leoni decided to embark on a solo career.

As of 2014 the artist has developed not only as an vocalist but also as a composer, with examples such as the songs: “Traidora”, a song with much similarity to Gente de Zona’s popular “Ay Lola”, which was recorded by Marc Anthony and Gente de Zona with great international success; and “Para que un día vuelvas” duet that he shares with Pablo Milanés. Leoni followed with other hits such as “Soledad” and “Me equivoqué”

The year 2016 was decisive for Leoni Torres, he gained some international recognition and a contract signed with Magnus Media, the production company and talent agency of the singer Marc Anthony. The composer and performer is currently focused on promoting his album that is comprised mainly of duos with prominent figures such as Pablo Milanés, Descemer Bueno and Kelvis Ochoa, Gilberto Santa Rosa, among others. He continues to promote his most recent work entitled “Toda una vida”.