The Hudson County Sheriff’s Office Crash Investigation Unit responded to the scene of an accident in Weehawken Thursday night where a bicyclist suffered serious injuries after being struck by two cars. 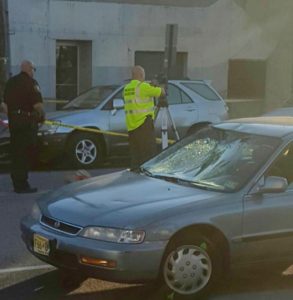 About 5:20 pm Albert Arias of Union City was hit by a 1996 Honda Accord driven by Jose Bruno, 47, of Weehawken driving south on Hackensack Plank Road.

The bicycle was then struck by a 2004 Lexus heading westbound and driven by Carlos  Ortega-Madrid, 42, of Union City.

Arias was thrown from the bicycle into a parked van.

A source tells us that the bike was across the street with the front tire mangled in-between the cars.

Both drivers remained at the scene and cooperated with authorities. No charges have been filed at this time, says Sheriff Frank Schillari.

The 35-year-old is now listed in stable condition and is expected to be released soon.

Weehawken Police first responded to the scene. The HCSO Crash Investigation Unit recovered video footage that captured the crash and is analyzing it along with physical evidence.

According to Schillari, the crash remains under investigation.