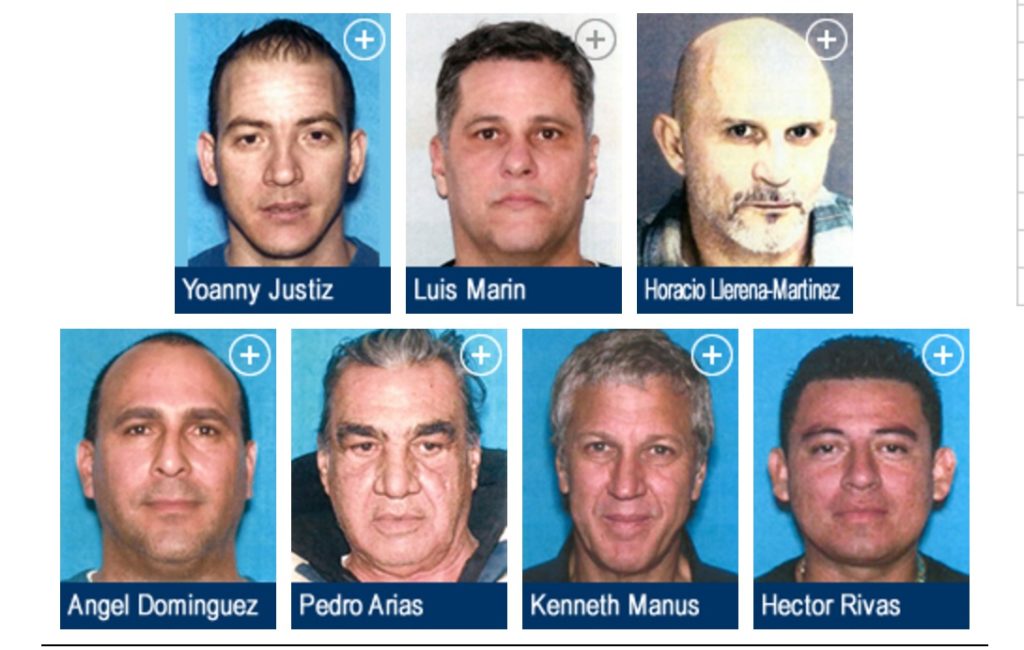 Each of these men was sentenced today by Superior Court Judge James J. Guida in Bergen County:

The members of the cargo theft ring worked together in various combinations to steal tractor-trailers containing cargo from the tri-state area of New Jersey, New York and Pennsylvania. They brought the stolen cargo to warehouses and lots in New Jersey, Brooklyn, N.Y., and the Bronx, N.Y.  Between June 2012 and April 2015, ring members engaged in nine thefts and two purchases of additional stolen goods in which the total value of the cargo and tractor-trailers stolen exceeded $1.5 million. The stolen cargo included $120,000 worth of catalytic converters stolen in Linden, N.J., and recovered at a warehouse in Saddle Brook, N.J.; $190,000 worth of Moroccanoil hair and body products stolen in Allentown, Pa., and transported through New Jersey to a lot in the Bronx, N.Y.; and $152,000 worth of GNC fish oil capsules stolen in Paterson, N.J., and recovered at a furniture store in Hillside, N.J.

“These thieves stole whatever cargo proved to be an easy mark, driving off with tractor-trailers loaded with everything from beer, to mozzarella cheese, to auto parts,” said Acting Attorney General Lougy. “Their crime spree was a real road show, but our prosecutors joined with the New Jersey State Police and U.S. Department of Homeland Security to track them across three states and bring them to justice.”

“Organized criminal syndicates are drawn to cargo theft because of the huge illicit profits that can be generated,” said Director Elie Honig of the Division of Criminal Justice. “Working with the New Jersey State Police and our federal partners, we are aggressively investigating and prosecuting this underworld activity, which disrupts commerce, inflicts big financial losses, and frequently finances other crimes.”

“Truckloads of cargo have always been a lucrative target for organized criminal groups.  Our Interstate Theft Unit, along with our partners in Operation Midnight Run, are glad to have taken this group off the road and recovered large quantities of stolen goods,” said Colonel Rick Fuentes, Superintendent of the New Jersey State Police.

“This case is an excellent example of how teamwork among state, local and federal agencies can disrupt these types of large-scale criminal activities and ensure that those involved are prosecuted to the fullest extent of the law,” said Special Agent in Charge Terence S. Opiola of ICE Homeland Security Investigations in Newark.

One of the indicted defendants was admitted by the court into the Pre-Trial Intervention Program.  The indictment is pending against the two remaining defendants, Osmay Perez-Herrera, 51, of New York, N.Y., and Luis Requena, 24, who was deported after his arrest in 2013. They face first-degree charges of conspiracy and money laundering, as well as second-degree charges of theft, fencing and receiving stolen property. The charges are merely accusations and they are presumed innocent until proven guilty.

Manus owned the warehouse on Midland Avenue in Saddle Brook where the Corning catalytic converters – stolen on June 20, 2012– were recovered. Manus fenced goods stolen by the ring, buying them himself or finding a buyer. At that warehouse, investigators also recovered pallets of beer – including a large amount of Guinness stout – worth more than $23,000, which allegedly were stolen by the theft ring in Easton, Pa. on June 22, 2012.

Ring members rented space at a furniture store on Route 22 in Hillside, N.J., which they also used as a location for their fencing activities.  In addition to the GNC fish oil supplements, which were stolen in Paterson on May 28, 2013, investigators also recovered the following stolen cargo there: over $77,000 worth of Bell bicycle parts stolen in Paterson, N.J. on May 28, 2013; about $65,000 worth of bedding, which was part of a trailer-load of $88,000 in bedding stolen from South Plainfield, N.J., on June 14, 2013; and over $9,000 worth of Little Hug juices stolen in Passaic, N.J., on July 1, 2013. The tractor-trailers stolen with the cargo were found at various locations.

Osmay Perez-Herrera, who uses the name “Omar,” was co-owner of the Mi Pais Supermarket on St. Nicholas Avenue in New York, N.Y. Investigators conducted two sting operations in which goods that were purportedly stolen allegedly were sold to Perez-Herrera for resale at various locations, including at the store. The “stolen” goods consisted of $80,000 worth of perfume and 330 counterfeit North Face jackets. Perez-Herrera is charged with third-degree counterfeiting in connection with the jackets.

The defendants, acting as theft crews in various combinations, also stole the following: