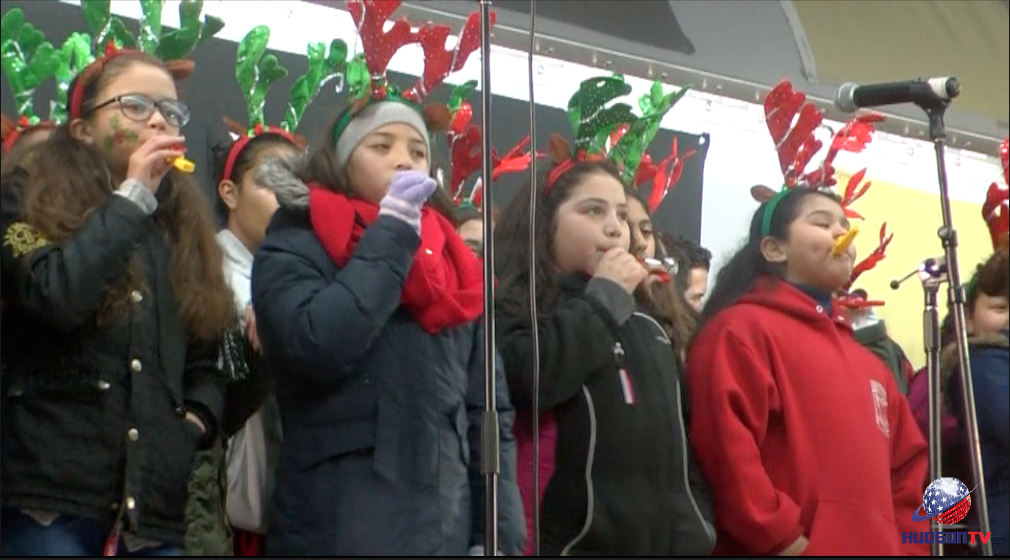 “I think that the festival is actually amazing,” says North Bergen resident, Aaliyah Jimenez.   “The kids are singing and that (the crowd) is giving cheers to everyone. Christmas is a great time of year.”

“I actually didn’t go to the uptown one so I’m going to the downtown one,” Mendoza says.

It’s an annual tradition in North Bergen and all about community. This one was for the downtown folks so they could have a good time at Winterfest too.

“Last year we ran into a rainstorm, says Mayor Nicholas Sacco. “And it was still pretty well attended. However, we had a rain date for this one — and it’s a cold night but it’s such a nice night.”

Amanda Lopez was so happy to be there, especially since her friends were performing from the Kennedy School Chorus…

“I’m excited for this,” Lopez says. “I know they always do the uptown one — but I wasn’t able to go and now I’m happy they’re doing it here.”

They held one celebration at the Food Bazaar parking lot, 1425 Kennedy Blvd. and the other at Nutrition Center, 1441 45th St.

“To be honest, Mendoza says — the best thing about Winterfest is the hot chocolate.”

According to Irene Mejia, she’s 26-years-old and says she still loves Christmas and that’s the spirit everyone should have.

Many braved the cold for the free Santa photos, free rides and activities, free face painting, food and goodie bags.   And there were smiling faces everywhere.

Assemblyman Pedro Mejia Officially Announces He Will Not Seek Re-Election