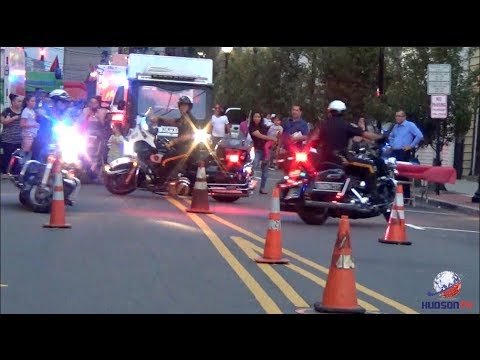 They came out in force Tuesday night to show and tell the community how to stay safe at Union City’s First Annual Public Safety Day.

“The camaraderie of all the departments — it’s a fabulous thing to see them all together,” says resident Richard Pallazzo.

It’s a chance to interact with first responders (Union City Police Department, North Hudson Regional Fire and Rescue, EMS, Hudson County Prosecutor’s Office, American Red Cross), learn what they do and what they recommend to keep you and everyone you love, safe.

“Hands-on demonstrations to the kids and their families teaching them about fire safety, also about police related issues,” says Chief Richard Molinari.

“This is something good so people be alert because some people are very negligent in that aspect with the smoke detector they don’t change the batteries,” Jackie Diaz says.

According to the mayor, they do police community meetings throughout the whole city. This year they’ll probably do 120.   “We’ve always done fire prevention but now we’re taking it a step further,” Stack says.

“Anybody who needs a smoke alarm, a CO detector, call me on my cellphone 201-376-1942,” Stack says. “I’ll have it delivered to your home and if you need help installing it, we’ll install it.”

Getting up close with police and other officials at this fun, educational event means a lot to so many people.

“‘Cause they protect the city and help us all,” Brandon Barros says.

They always welcome the opportunity to talk to the community and make a difference.

“Good night for us to come out, to meet with the public, giving out smoke detectors, carbon monoxide detectors,” Molinari says.

He’s a fire victim himself so he knows what it’s like.

“My mother died in a fire,” Pallazzo says. “It’s a great thing to give out the smoke detectors, make them aware of who to call, when to call.”

It’s helpful to know who’s on the other end of the phone when you call the police — so they try to put a face to the voice to the name and make that connection in person.

“We see all over the country that when you can bridge the gaps between the police departments and the community and we have a great, great working relationship with the community in Union City,” Molinari says. “This is exactly what we’re doing — just building good community relations.”

At the end of the day, that’s what it’s all about.

“I think it’s a good event for everyone,” Stack says.  “And it just puts a sense of how important public safety is in all of our lives.”