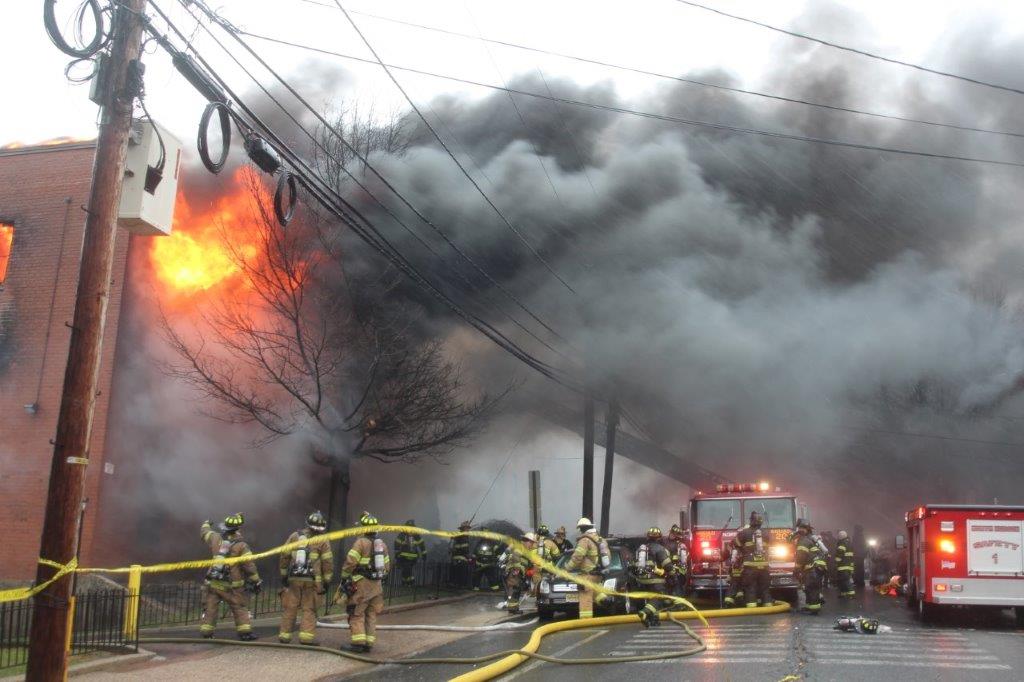 High winds didn’t help North Hudson and area firefighters as flames were fanned by the Friday Nor’ easter after a fire broke out in a three-story occupied multiple dwelling on the 1200-block of 26th St., North Bergen.

Shortly before noon, firefighters were dispatched to the building for a reported fire.  The captain of North Hudson Engine 4 radioed in that there was smoke showing from Kennedy Boulevard, as the company approached the scene.

Fire on the second floor spread fast and extended to the third floor.  All occupants of the building were reported evacuated to safely.  A second alarm was quickly transmitted, followed by a third-alarm.

Firefighters made an interior attack and knocked down fire on the second-floor, but flames were already above them on the third-floor.  Soon, the roof was involved.  Firefighters were ordered out of the building for a defensive attack.  Later, fire consumed the roof, which collapsed into the top floor.

Fourth and fifth alarms were sounded bringing in additional firefighters from Jersey City, Hoboken and Kearny to the scene.  Low-banking smoke covered the area, and alarms of fire were being called in east of the fire scene where the smoke was traveling.  Smoke also covered the Kennedy Boulevard side of Union City High School, on that city’s side of the boulevard.

The heavy smoke was again followed by huge flames as high winds help fan the fire.  Firefighters used numerous hose streams to knocked down flames, and most of the fire was reported knocked down at 1:22 p.m.

The Jersey City Gong Club canteen truck was on hand to furnish weary firefighters with hot soup, water and other refreshments, as the storm continued and firefighters conducted overhaul operations.