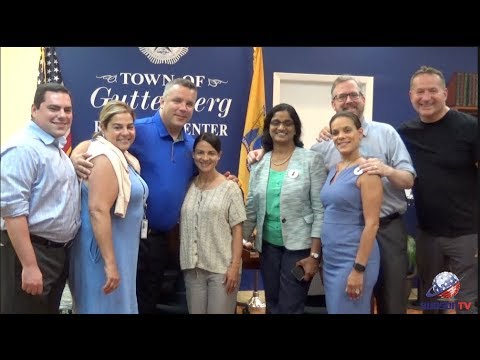 Local community mental health providers were on hand Wednesday evening for ‘Healing in North Hudson’ at the Galaxy Towers Mall in Guttenberg, an event promoting mental health awareness and a stigma-free North Hudson.

“Not being accepted, not being understanding of — can definitely lead to a lot of complications with mental health,” says Mercy Villa, from Hudson Pride.

“The visibility of a table can mean a lot for one person, somebody’s like, ‘wow, I didn’t know this existed,” says Hudson S.P.E.A.K.S Community Outreach Educator, Maria Parmagos. “We’ve been in existence for a decade and some change actually now. Our goal is to make our services more accessible so people can be free to come forward to receive something. Say counseling’s not it for them right now and they just need someone to talk to.”

Life is tough but events like this can point people in the right direction to get the help they need so they don’t have to suffer in silence.

“This is evident, 25 vendors here that so many programs want to help what the challenges and the certain things that people are facing every day,” says Mayor Wayne Zitt. “We want to wake up every day, have a great day, smile — and certain things set people back for whatever their triggers are.”

“So, with our center we don’t just provide LGBTQ members with therapy and mental health resources; we also are a support community and community based support group where members feel safe to talk about their experiences and stress and they empower each other and it’s just a home,” Villa says.

“Elected leadership and government agencies of the North Hudson municipalities have been working to grow the resources that are here for our most vulnerable as well as those families that need services in their times of crisis,” says Dr. Troy Mack, director of Weehawken Human Services.

The Jersey City area, South Hudson and West Hudson have a lot of resources — but they noticed that the North Hudson area was lacking.

“Mental health like I said is an issue, not only in this area but around the country, our state and country — it is an issue,” says Assemblywoman Angelica Jimenez, representing the 32nd District. “And it’s something that’s being addressed and I’m happy to be part of this.”

It’s all about giving everyone an outlet to meet with mental health professionals and learn about resiliency, recovery, self-care and more.

“We’re there to help folks right now that are figuring out what it’s like advocating and you may want to volunteer with us and that’s a step closer in their mental health journey,” Parmagos says.

According to the mayor, they were there to show that there is support.

“Whether it’s in Guttenberg, whether it’s in West New York, North Bergen,” Zitt says.  “Besides our library director had coordinated this with Troy Mack, part of the American Legion and also our Department of Health director, Janet Castro came up with this great idea. And we were like, ‘let’s run with it.’”