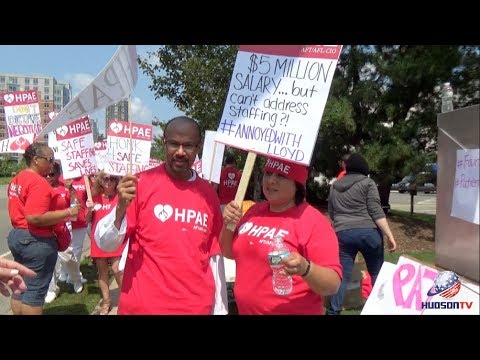 They put their lives on the line everyday helping the sick and injured and on Wednesday they made sure their voices were heard loud and clear that caring for those patients matters.

Cars honked in acknowledgement as they whizzed past on River Road outside Palisades Medical Center in North Bergen, where healthcare workers say negotiations have stalled and they’ve been without a contract since May.

According to Rosen, they’re (the employer) is sinking millions of dollars into things like advertising and lobbying and legal fees.

“All that money should be placed into healthcare by hiring enough nurses to take care of patients at the bedside,” Rosen says.

“By paying living wages to our workers,” adds Rosen.

It hits hard to those not in the proper wage. They have to scramble to make ends meet.

“I just really hope that after that picket they will listen to us and they’ll be able to give us more dates to negotiate,” says HPAE Local 5030 President, Mickie Miquiabas, RN.

They say our health should not be the source of corporate wealth.

“This corporation, they have enough money to pay housekeepers, boiler makers, healthcare aides a $15 minimum wage,” Gerard says.  “That’s also what we were out there for  — and we wanted to let the public know that our fight is their fight.”

For some time now they felt as if they weren’t being heard and no progress was being made at all.

“Finally they have given their economic proposals to us and we have already given ours to them, so we’re trying to get into an agreement hopefully sooner than later,” says Cora Matos, RN, who works in post anesthesia care at Hackensack UMC Palisades.

They’re negotiating with only representatives from the corporation and so that’s why they’re calling for change.

“Corporate management should spend a day in a nurse’s shoes and see what we’re talking about, that would be marvelous,” Gerard says.  “The people in the hospital and the managers in the hospital don’t have a say in the larger corporation.”

Cora is optimistic — she feels like they are negotiating in good faith and they put the cards on the table for Hackensack Meridian Health.

“Meantime we’re representing all these employees, the union members and we’re fighting for everybody’s rights — we just want a fair contract.”

“Healthcare dollars belong in healthcare to take care of the patients, not in building corporate empires,” Rosen says.