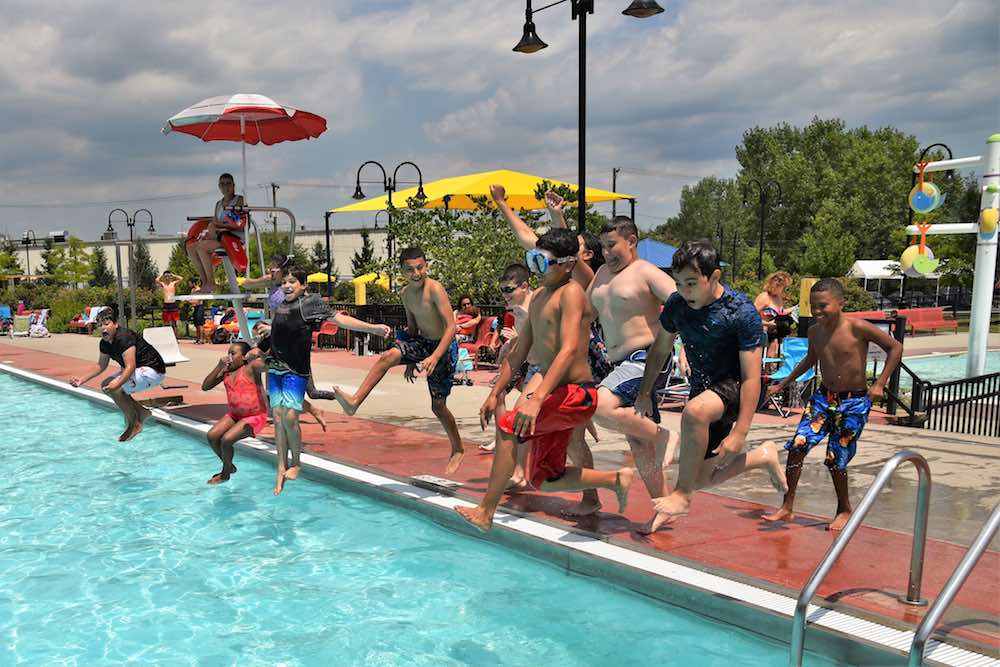 North Bergen’s Junior Police Academy ended its 2018 season with a splash on Friday, July 20 with an afternoon picnic at the pool. The class of 25 cadets spent hours in the water and on the volleyball courts with their training officers and mentors, in addition to enjoying a tasty meal. Mayor Nicholas Sacco even dropped by to congratulate them on completing their exhausting week of activities.

Prior to that, one of the highlights of the week was the landing of an Airmed helicopter from Hackensack University Medical Center. The cadets met the helicopter as it touched down in Stan Newman Field, then got the chance to climb aboard and ask a million questions of the crew, Pilot Jonathan Mack, Flight Nurse Dave Reilly, and Flight Paramedic Tom Opperman.

Also at the field to give hands-on demonstrations of firefighting equipment and techniques were North Hudson Regional Fire & Rescue Captain Jose Ramos and Firefighters Vincent Caruso and Philip Hoffman. The cadets eagerly inspected the firetruck, passed around a heavy firehose, and learned about the duties and responsibilities of the firefighters.

North Bergen’s Junior Police Academy is an annual initiative designed to give kids entering grades 7 and 8 an introduction to law enforcement and rescue work. Structured like an actual police academy, it exposes the cadets to many different aspects of public service in an intense five-day session.

Retired Police Officer Joseph Sitty oversees the program for the township, this year assisted by Detective Santos Benitez and Officers Kaylan Tarabocchia and Vanessa Espinoza. The junior mentors from the high school providing valuable guidance and assistance throughout the week were Noor Attalah, Joseph Gagliardi, Justin Marrero, and Samantha Venagas

The program is made possible by the support of Mayor Sacco and the Board of Commissioners, and Police Chief Robert Dowd and the NBPD Command Staff, with the participation of the Hudson County Corrections Department, New Jersey State Police, Hackensack Medical Center, North Hudson Regional Fire & Rescue, and many other partners.