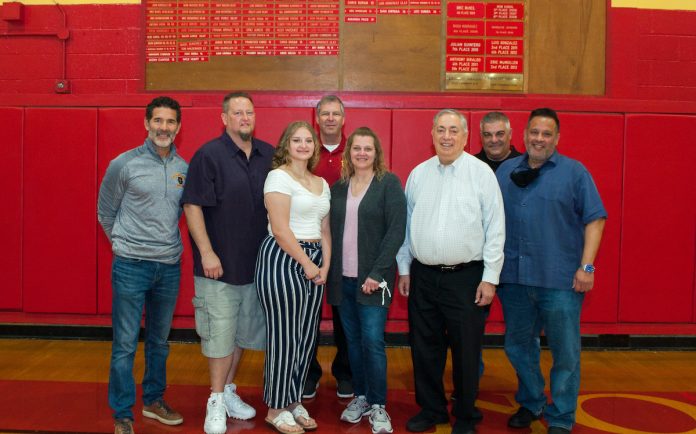 North Bergen’s Amanda Pace Wins First Girls Wrestling State Championship in School History
NORTH BERGEN, NJ – North Bergen High School wrestler Amanda Pace, a student at High Tech High School in Secaucus, was crowned as the state’s top 180-pound wrestler on Saturday, April 10, after she pinned her opponent in the third period of the final match for the NJSIAA’s State Championships held at Phillipsburg High School. Pace becomes the first student-athlete in school and county history to win a girl’s state championship and the school’s first state champion since 2014.  Pace wrestles for NBHS because HTHS does not have a girl’s wrestling team.

“I have worked very hard for years even before high school. All I had ever wanted was a high school state title. Two years in a row I had fallen  short. I was heartbroken, yet now I feel nothing but love and accomplishment for all the work I’ve put in,”  said North Bergen Wrestler Amanda Pace. “Wrestling has and will continue to teach me more and more everyday about what the word tough means. My family has been there for me through it all, my parents, sister, grandparents and the long list of relatives far and wide. Them along with my coaches support me in unimaginable ways, and it’s because of them that I have come so far. I am a North Bergen Wrestling State Champion. And proud to be one.”

The High Tech High School Junior capped off an unusual season due to the COVID-19 pandemic, which pushed the wrestling season to run from February to April instead of its usual November to March schedule. The pandemic didn’t slow down the Bruin grappler, Pace worked relentlessly during the summer and offseason to ensure she didn’t fall short of her goal once the season came around.

“Once we realized there would be a season, we were excited with the chance to wrestle for a title,” said North Bergen Wrestling Coach Jerry Maietta. “Although Amanda moved up to a different weight class, we weren’t too concerned. She has put in the work during the offseason to accomplish her goal; a state championship. Finishing second the previous two years only fueled her to put in the time so she could stand on top of the podium.”

“I would like to congratulate Amanda on this historic accomplishment,” said North Bergen Mayor Nick Sacco. “North Bergen’s wrestling program is known around the state for always having good, tough wrestlers and Amanda is no exception to this tradition, her state championship confirms it.”