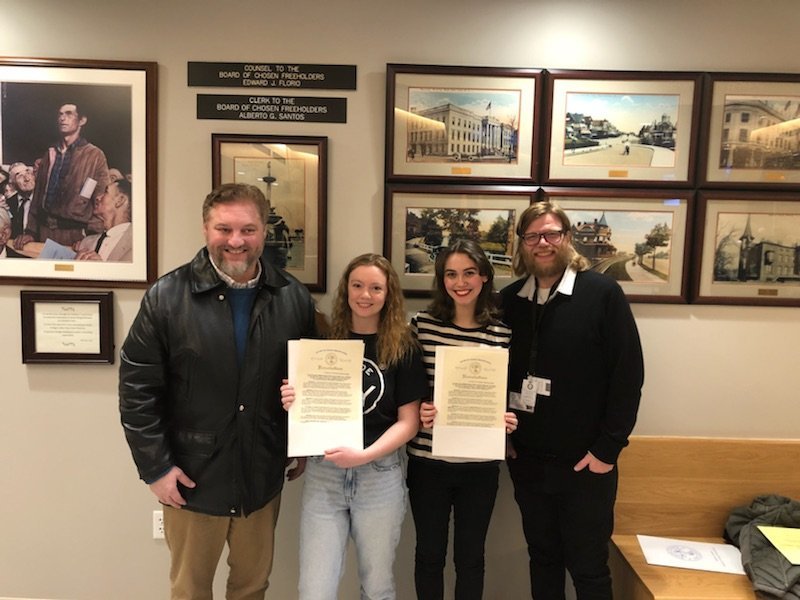 JERSEY CITY, N.J. — High Tech High School students Noelle White, of Weehawken, and Katerina Vail, of Jersey City, were honored by the Hudson County Board of Chosen Freeholders on Wednesday for their success at the fourth annual High School Film Festival at Ramapo College.

The short film, “No Signal,” follows a young girl attempting to talk a man of suicide and struggles when she discovers he speaks a different language. The film was named Best Cinematography at the festival in December.

“Students at Hudson County Schools of Technology continue to produce impressive work both inside and outside of the classroom,” said Hudson County Board of Chosen Freeholder Chairman Anthony Vainieri. “On behalf of the Board, I congratulate Noelle and and Katerina for successfully competing in this statewide competition and making all of Hudson County proud.”

Judges at the competition were particularly impressed by the soft lighting, color, camera placement and movement used in the film. Noelle and Katerina were among seven winning submissions and received a plaque and gift card.

“At Hudson County Schools of Technology, we embrace the creativity and talents of all of students,” said Acting Superintendent Amy Lin-Rodriguez. “Noelle and Katerina competed against a number of talented young filmmakers and their success at this festival is a great representation for our district. We are all exciting to celebrate all they have achieved and thank the Freeholders for recognizing their hard work.”

Both students are juniors studying television production and film. Their film instructors are Gregg Ascolese, Chris DePierro and Rob Meyer.

“At a young age, Noelle and Katerina have already presented themselves as talented and professional filmmakers,” said Gregg Ascolese. “Their win at the High School Film Festival is a testament of their commitment and dedication to their work. All of us in the television and film department are proud of their success and look forward to supporting Noelle and Katerina in all they will accomplish in their careers.”