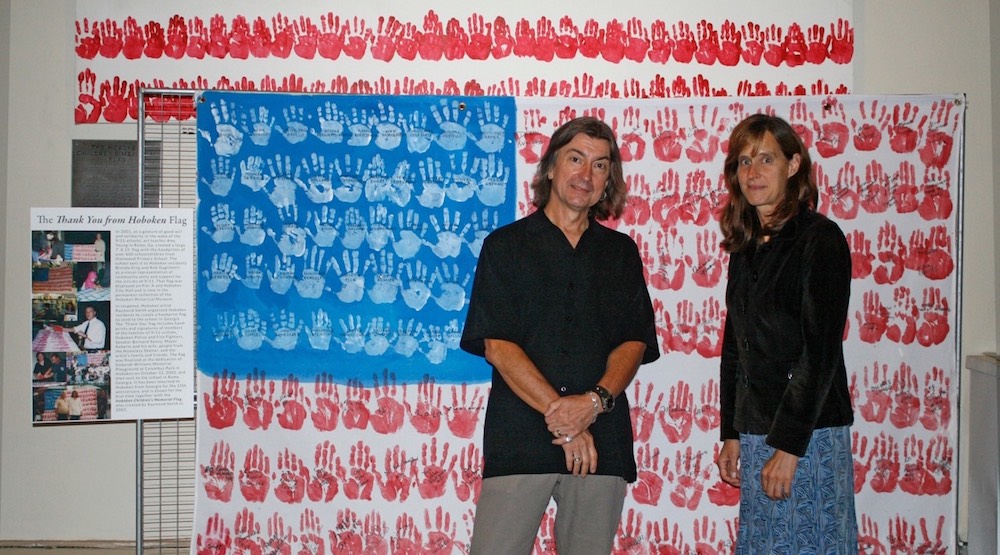 HOBOKEN, NJ-Two handprint flags created to commemorate the victims of the 9/11 attacks will be displayed together for the first time for the month of September.

In 2001, as a gesture of good will and solidarity in the wake of the 9/11 attacks, art teacher Amy Young in Rome, Ga, created a large 7’ X 15’ flag with the handprints of over 600 schoolchildren from Glenwood Primary School. The school sent it to Hoboken residents Brenda King and Rob Guglimetti as a visual representation of community unity and support for the victims of 9/11. That flag was displayed on Pier A and Hoboken City Hall and is now in the permanent collection of the Hoboken Historical Museum.

In response, Hoboken artist Raymond Smith organized Hoboken residents to create a handprint flag to send to the school in Georgia. The ‘Thank You from Hoboken’ flag includes handprints and signatures of members of the families of 9/11 victims, Hoboken Police and Fire Fighters,  Senator Bernard Kenny, Mayor Roberts and his wife, people from the Homeless Shelter, and the artist’s family and friends. The flag was finalized at the dedication of Deborah Williams Memorial Playground at Columbus Park in Hoboken on October 12, 2002, and then sent to the school in Rome, Georgia. It has been returned to Hoboken from Georgia for the 15th anniversary, and is shown for the first time together with the Hoboken Children’s Memorial Flag, also created by Raymond Smith in 2002. The Thank You from Hoboken Flag will be displayed with the Hoboken Children’s Memorial Flag in the lobby of City Hall for the month of September.

The Hoboken Children’s Memorial Flag, which has 229 handprints, 8 of which are the children of the Hoboken victims.That flag had been on display at the Hoboken Board of Education and it’s current home is in Hoboken City Hall.