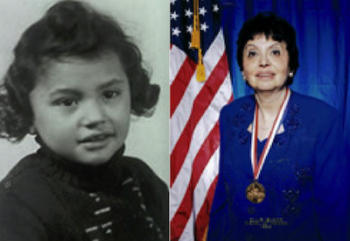 Bayonne’s annual Holocaust Remembrance Service is scheduled for Wednesday, May 4, at 6:00 p.m., in the City Council Chambers at 630 Avenue C.  The event is sponsored by the United Jewish Appeal (UJA) Federation of Bayonne and the Bayonne Interfaith Clergy, and is hosted by the City of Bayonne.  Mayor Jimmy Davis is the honorary chairman of the program.

The featured part of the program this year will be a presentation by Inge Auerbacher, a Holocaust survivor who was the last Jewish child born in Kippenheim, Germany.  Ms. Auerbacher spent three years between 7 and 10 years of age in the Terezin (Theresienstadt) concentration camp in Czechoslovakia.  Out of 15,000 children at that camp, only one percent survived, and Inge was one of them.  Amazingly, her parents also survived.  They emigrated to the United States in 1946.  Ms. Auerbacher was stricken by a serious illness that resulted from years of malnutrition in the concentration camp.  She was hospitalized for two years and struggled for many years to regain her strength.  Inge graduated from Bushwick High School in Brooklyn. She earned a Bachelor of Science degree in Chemistry and did post-graduate work in Biochemistry.  She worked for more than 38 years as a chemist with prominent scientists in research and clinical work.  She has published four books, more than fifty poems, and numerous articles.  Ms. Auerbacher has been lecturing on the Holocaust since 1981, and has spoken to audiences in the United States, Canada, and Germany.  Her hometown of Kippenheim has instituted the Inge Auerbacher Prize, which is awarded to students and institutions that promote tolerance and human rights.

At the service, prayers and reflections will be offered by rabbis from two Bayonne Jewish congregations and representatives of various other religious denominations.  Rabbi Jacob Benzaquen of Temple Emanu-El and Rabbi Marc Disick of Temple Beth Am will take part, as will Christian pastors and a representative of the Bayonne Muslim community.

Hara Benjamin-Garritano, a soloist from Temple Beth Am, will lead the singing of Hatikvah and the Star-Spangled Banner.

The event will include a candle-lighting ceremony in which Holocaust survivors and others will take part.

The winner of the Holocaust essay contest at Bayonne High School will read from the essay and will receive an award sponsored by the Preminger and Epstein families.

For more than three decades, this memorial program has taken place in the City Council Chambers at 630 Avenue C, Bayonne.  The public is invited to attend.