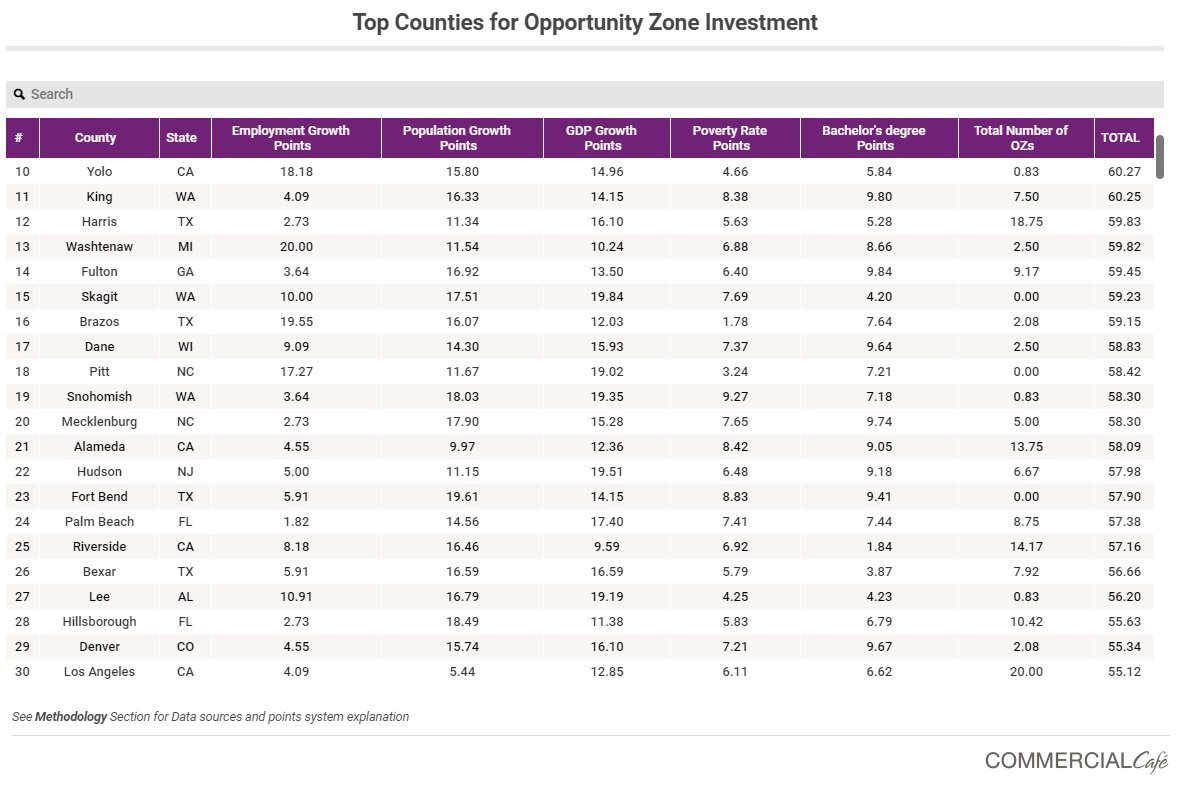 In the world of real estate, Opportunity Zones have become a very popular business discussion topic.  What are Opportunity Zones?  Well, if you are an investor, you already know.  If not, then allow me to explain.  OZ’s, as they are commonly referred to in the real estate industry, were introduced to the tax code through the Investment in Opportunity Act, or “IOA,” after it was approved as part of the Tax Cuts and Jobs Act of 2017.

Confusing?  Well, put more simply, this program proposes tax incentives for investors who can redirect dormant capital gains into under-developed, low-income municipalities and communities that are designated as Opportunity Zones.  This process is done through Qualified Opportunity Funds.

In a nutshell, OZ’s are designed to attract interest, spur economic growth and development, as well as job creation in distressed communities and neighborhoods which might otherwise have been overlooked.  There are 8,764 eligible tracts of land in the United States which are calling out to prospective investors saying, “develop me.”  The tracts are designated by the Governors of each state and approved by the Department of Treasury.

Let me provide you with some statistics.  According to Alexandra Farcas, a Marketing Communications Specialist with Yardi Systems, the study looked at indicators such as employment growth (from the Bureau of Labor Statistics), GDP growth (from the Bureau of Economic Analysis), population growth (from the Census Bureau), poverty rates at the county level (from the Census), the educational attainment level of the county’s labor force and the number of eligible opportunity zones within each area, then assigned points to each indicator to come up with its final rankings.

The breakdown for the indicators is as follows:
*For Employment Growth, counties received between 0 and 20 points.  For example, a county with the highest employment growth rate would receive 20 points.  The county with the lowest growth rate received nothing.
*For the Population Growth and the GDP Growth, counties also received between 0 and 20 points respectively.
*Percentages from the total employed population over 25 who has a Bachelor’s Degree received between 0 and 10 points.
*From 0 to 15 points were awarded based on the number of Opportunity Zones in a county.
*The same number of points, from 0 through 15, was awarded based upon a county’s Poverty Rate.  The lower the rate, the higher the points awarded.

Farcas says entries could gather a maximum of 100 points total.

In New Jersey, Governor Phil Murphy nominated 169 Opportunity Zones.  All of them were approved nearly one year ago, on April 9, 2018.  21 of these OZ’s were located in Hudson County.

So, what do the indicators show for Hudson County?  Why is it ranked 22nd in this study?  Well, it received a grand total of 57.9 points.  Hudson had impressive scores for GDP growth (19.5 out of 20 possible points).  The percentage of the population having a Bachelor’s Degree stands at 9.2 out of a possible 10 points.  By comparison, our nation’s capital, Washington, D.C., fared worse than Hudson County on those two indicators, but received a higher OZ score of 63.94 points, placing the District as the third most attractive Opportunity Zone Investment locale in the country.

The rest of Hudson County’s indicators based on this study show it garnering 5 points for economic growth, 11 for population growth, 6.5 for poverty rate and 6.7 for  the number of OZ’s.  again, Hudson County’s grand total came to 57.9 points.  The next closest New Jersey county was Mercer with 47.9, ranking it 91st nationwide.  Essex County was the 104th most attractive county nationwide for Opportunity Zone Investment.

So, looking ahead in time, what does this mean for Hudson County?  According to Farcas, “Engaging the market and recruiting investment is paramount in the success of Opportunity Zones.”  Last week, at the New Jersey Opportunity Zone Summit held in New Brunswick, Governor Murphy touted the program.

As proposed in the Governor’s Economic Plan, which he announced last October, the NJEDA will work to create an Opportunity Zone Marketplace.  This nationwide digital platform will be designed to match investors with business opportunities in the Garden State’s OZ’s.

The ultimate goal of Opportunity Zones is to funnel $6.1 trillion of unrealized gains into distressed communities across the United States through tax deferment and deduction for investments of 10 years or more.