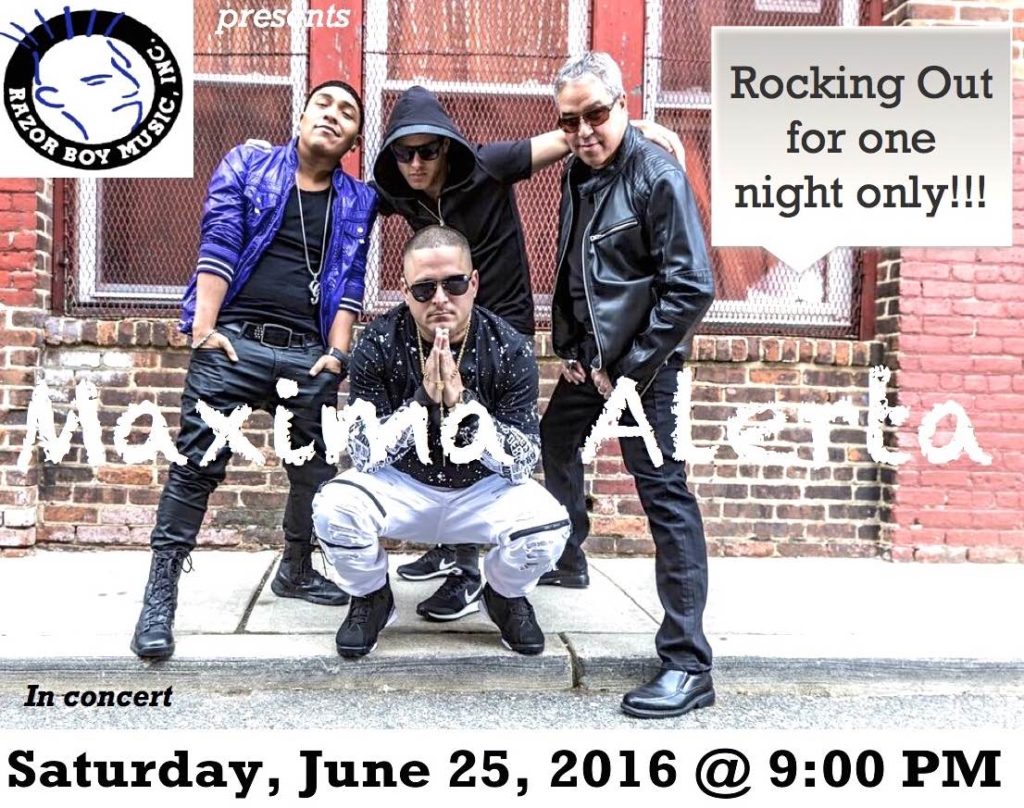 Razor Boy Music presents the musical group Maxima Alerta at The Bitter End, located in Greenwich Village, 147 Bleecker Street (between Thompson and LaGuardia) New York City, NY 10012 on Saturday, June 25, 2016 at 9:00 PM.   Maxima Alerta is one of the best known bands coming out of Cuba.  The band is now based in Hudson County, and have been selling out concerts wherever they play.  They are celebrating the release of their new single “Vive la Vida” https://m.youtube.com/watch?v=9YEtBVjltIc.  Established in 1961, The Bitter End is the oldest rock and roll club in New York City. The classic red brick stage backdrop and intimate vibe make this historic venue almost as iconic as its headliners. For over 50 years, audiences have been blown away by legendary artists like Stevie Wonder, Bob Dylan, Lady Gaga, Jackson Browne, Neil Diamond, Gavin DeGraw, Woody Allen, Jon Stewart, Randy Newman, Billy Crystal, Tommy James, Norah Jones, Donny Hathaway, Curtis Mayfield, and thousands more.

Audiences can expect to dance all night.  This music is for everyone.  Maxima Alerta’s sound is fresh and exciting, with a positive happy message.  Some of their songs you may recognize, such as “La Figura (“Ay Lola”)” which they recorded with the multi-award winning and internationally renowned group Gente de Zona.

Admission is $10 and can be purchased in advance online by visiting: www.BitterEnd.com  (Direct link: http://maximaalerta.bpt.me) This will be a special concert… a night of music and fun for everyone.  Come join the party.  You’re guaranteed a great time.

Maxima Alerta is known for its fusion of Cuban Music and other genres forming a fresh hip sound.  From son cubano to conga, from cumbia to merengue, from rap to ballads… all with a fresh modern sound taunting audiences on their feet to dance and have a good time.

The group was formed in Santa Clara, a busy city in the center of Cuba, where Ray Machado aka “El Italiano”, the lead singer, musical director, and composer for most of the songs of the group, developed the band.

In 2003 Máxima Alerta exploded on the scene, hitting radio and television stations with two songs, “Cast pa ‘front’ and “Adegüello 1895” which very quickly became popular throughout the country. Thanks to these successes, in 2004 they delivered their new album “Llegaron los Alertas”, recorded at Abdala Studios owned by renowned singer/composer Silvio Rodriguez with the French company Lusafrica, and joining their catalog and sharing the stage with popular groups such as La Orquesta Aragón, Polo Montañez, Anacaona, Isaac Delgado, Osdalgia, among others.

In 2005 Máxima Alerta was nominated to Cubadisco as “Best Album Rap, Dance and Hip Hop” which garnered the group great popularity both nationally and internationally, as well as topping the charts. Later in 2009 the group returned to the top of the charts with the song “La Figura” recorded with the group Gente de Zona.

Maxima Alerta has crafted an intense and dynamic signature sound. This fresh sound is a fusion: elastic bass lines, powerful programming, catchy choruses sung in unison with warlike ardor, counterpoints that owe as much (if not more) to rap as to reggae or Latin beats… it all comes together to showcase voices that drive themselves mercilessly, to unleash a verbal bombardment of exceptional skill and intensity but at the same time accentuating the flavor and influence of Cuban music.

After settling in the United States, Ray Machado reorganized the group and recorded a new production. In October 2015, Maxima Alerta was reborn in the United States performing in two SOLD OUT concerts in New York with Fernandito Villalona. In 2016, Maxima Alert released its new song “Vive la Vida” with an accompanying music video.  Subsequently the group had a SOLD OUT concert at the legendary Maxwell’s in Hoboken, and another SOLD OUT concert with Latin bachata star Anthony Santos at the historic 1,500 seat Park Performing Arts Center.

About The Bitter End

The Bitter End is located in the heart of Greenwich Village. We are open seven days a week and showcase live music every night, including singer/songwriters, rock , blues, jazz, funk, alternative, hip-hop, spoken word, a capella, and country. Every Monday and every other Sunday we host open jam sessions for newcomers and aspiring musicians. At The Bitter End, you never know who or what you’ll hear next.

It is with a heavy heart The Bitter End would like to announce the loss of our colonel, Paul Colby, who passed away Feb. 13th,2014 at the age of 96. In his 70 plus years in the business , Paul has touched the hearts of countless musicians and patrons and helped to launch many great careers in the music industry. Paul was sharp , witty and happy until the end.  Paul will never be forgotten as his legacy will live on Bleecker Street. The name says it all: PAUL COLBY’S THE BITTER END