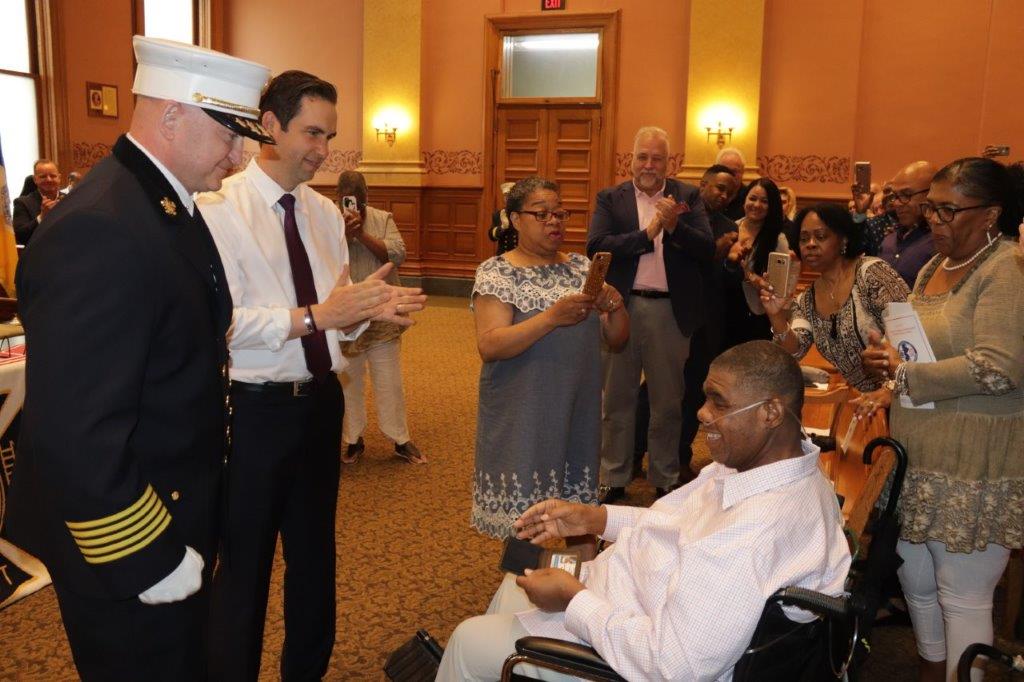 Story and Photos by Ron Jeffers

(Jersey City).- On Friday morning, the Jersey City Fire Department honored their own at the annual Meritorious Award Ceremony, at City Hall.  Firefighters were recognized for their courage, experience, and life saving actions.  These actions range from fire scene rescues, to a scaffold collapse, trench rescue and medical emergencies.

The person who was the center of it all, was not a career firefighter but a loyal friend of the FDJC.  Gregory Green, 65, was rescued by firefighters from a burning home when he was 10-years-old.  Later, his father took him to the Communipaw Avenue firehouse for a visit.  The rest is history.  He has spent the past 55-years hanging around that firehouse and watching after his friends, or his second family at his home-away-from-home, as he puts it.

Over those 55-years, Gregory would respond to fires in his neighborhood and support his Brothers.  He would line up empty and full air packs and assisted them in many ways at fire scenes.  Back at the house, he would help fill those empty air bottles and looked after the house when firefighters were out on routine calls.

When he wasn’t at the firehouse, he was employed by the Jersey City Medical Center, assisting with patient transport.

Green is a cancer survivor, but is battling other health issues.  His friend, Battalion Chief Steve Drennan transported him to City Hall, where he was to be honored.

Before the firefighters awards were given out, Gregory was honored by Chief of Department Steve Mc Gill and Mayor Steven Fulop and named Honorary Deputy Fire Chief.  He received a badge and ID card.  In addition, he was given a photo of himself that was part of a previous department yearbook.

Gregory was sitting in the front row during the ceremony with family members. As firefighters came forward to receive their awards, they all turned and offered Gregory a salute and/or hand shake.

City firefighters stop by at his rehab center, in the Heights, and check up on him and let him know he is in their hearts.

“They took him in and they nurtured him and loved him,” sister Theresa Brown said.  “And, because of that, he knew that he was loved.  They became his second family.”