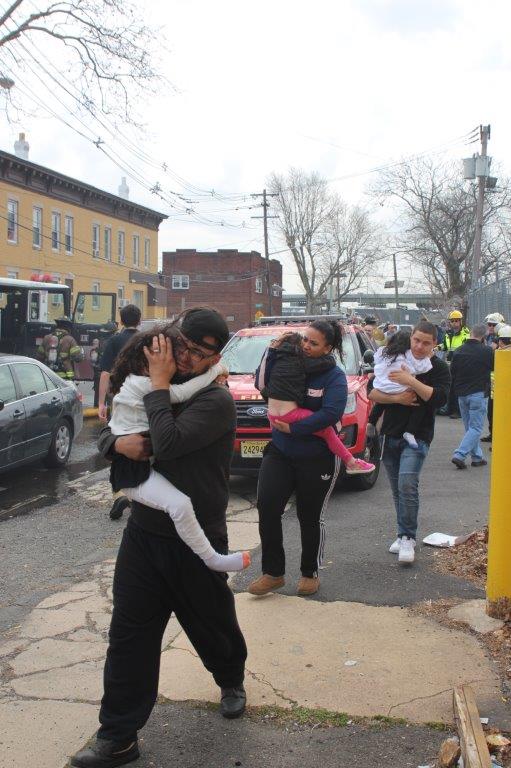 By Ron Jeffers.- Twenty-four residents were left homeless after flames raced through their Gates Avenue home on Friday morning.  Several firefighters were treated for non-life-threatening injuries.

The fire department dispatched companies to 26 Gates Avenue at 10:30 a.m.  Firefighters said they saw smoke from a distance while responding to the scene.  Engine 13 radioed  in a working fire with flames coming out of the second-floor windows of a 2 ½ story wood-frame dwelling.  It was described as a four-family home.  Fire was venting out of the rear windows and a column of smoke rose into the sky, attracting news helicopters.

Before fire units arrived, an adult and three children could not escape via the stairway.  Olrando Martinez reportedly passed the children out of a front second-floor window to an awning and into the arms of another resident.  Martinez then jumped out and only suffered a minor cut to his arm, officials said.

A second-alarm was quickly transmitted which was later followed by a third-alarm.  Flames were intense and caused a partial collapse of the rear roof area.  Firefighters were ordered out of the structure to begin an exterior attack with hose streams and a tower ladder.

The residents were taken to an Office of Emergency Management bus on Garfield Avenue where they were interviewed and offered assistance from the Red Cross.

Firefighters stated they responded to a fire in the same apartment back in December.

As firefighters made progress controlling the flames, the owner of the building was escorted from the scene in handcuffs.  City spokeswoman Kimberly Wallace-Scalcione said he was arrested for outstanding warrants for his failure to appear in court on previous matters.

Deputy Chief Paul Drennan declared the fire under control at 12:22 p.m.  The Jersey City Gong Club canteen truck was on hand to supply soot covered firefighters with bottled water and other items at their rehab station.