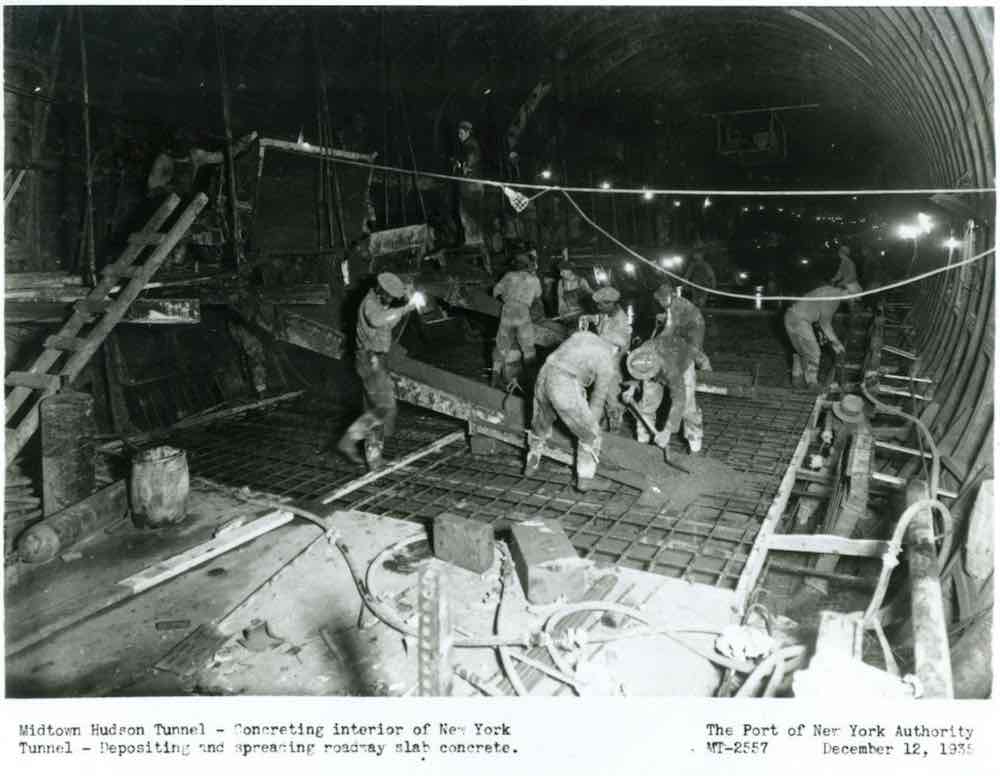 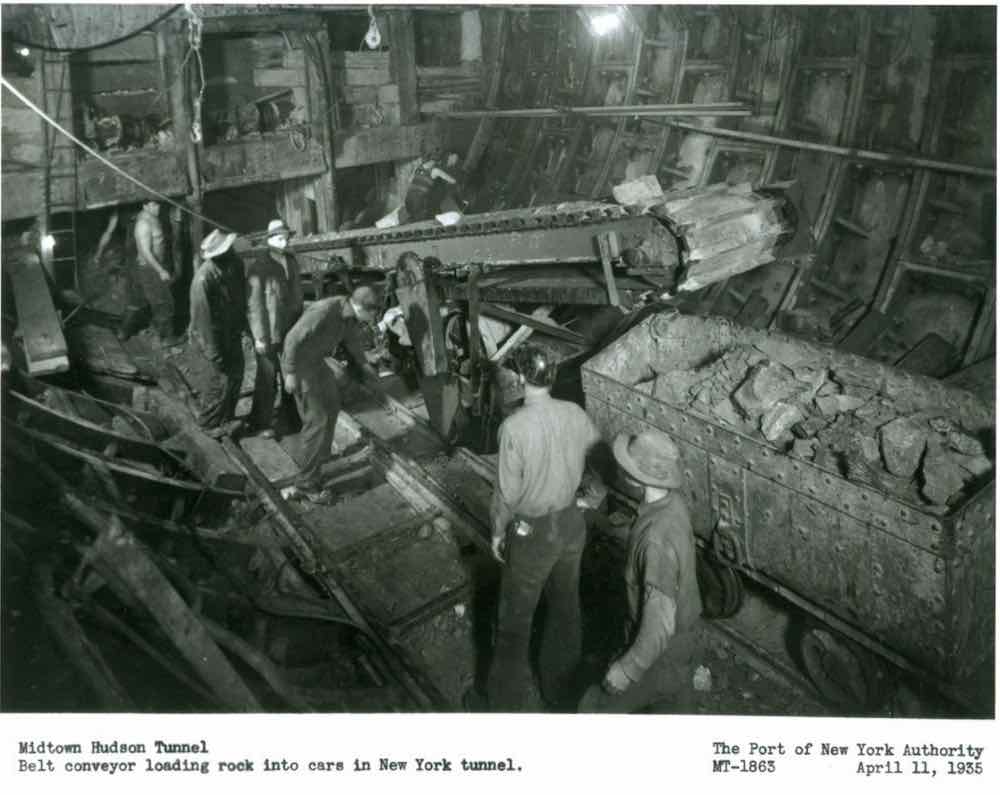 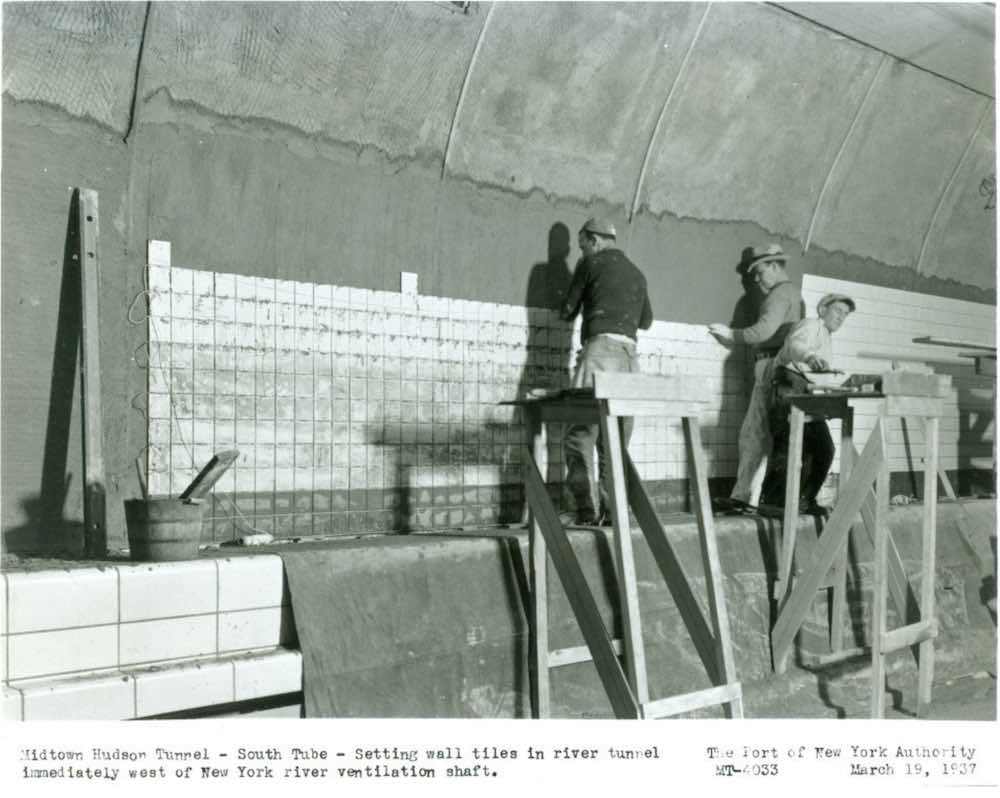 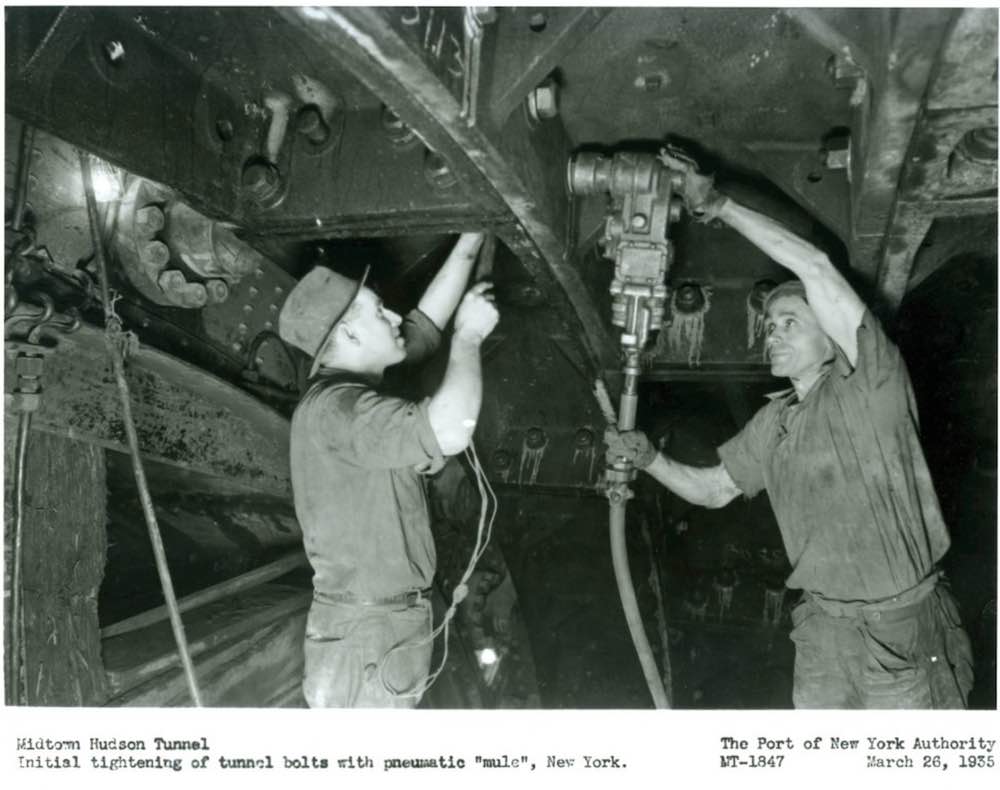 Even with the incredible financial success of the Holland Tunnel in the late Roaring Twenties, gridlock in mid-town Manhattan remained a major problem.

But no one could have predicted the 1929 stock market crash and Great Depression of the ‘30s would make financing a new trans-Hudson tunnel crossing such a tough undertaking, says the Port Authority of New York and New Jersey, in an official blog post.

“The Lincoln Tunnel opened on this day 79 years ago. Our tribute, in photos, to the Sandhogs who built this crossing,” they tweeted this morning.

The slideshow was taken during construction of the first tube of the Lincoln Tunnel between 1935 and 1937 along with the cast of characters who tunneled beneath the Hudson River.

Newspaper reporter LH Robbins dubbed them “Big Irishmen, Italians, Negroes, Poles and Swedes, ox-strong, rough-clad, and spattered with mud, plaster and red lead.  A heroic race they are, they and the stout-hearted Sandhogs, gamely and proudly doing Titans’ work down under the tide, under the town, making the world convenient for the rest of us,” according to PANYNJ.

That’s when the Port Authority turned to the Progress Works Administration to obtain financing. The federal New Deal agency in 1933 loaned the Port Authority $37,500,000 in return for the agency’s agreement to build one tube instead of two.

In 1938, work on the second tube began — but due to labor and material shortages caused by World War II, the work was suspended and the second tube was not ready until 1945.

A third tube was added in 1951 by The Port Authority and completed in 1957, exactly thirty years after the opening of the Holland Tunnel.

The Lincoln Tunnel opened on this day 79 years ago. Our tribute, in photos, to the Sandhogs who built this crossing. https://t.co/ikhy6ZyMLt pic.twitter.com/LIDF6EYmN3

The McCloud Cares Foundation, a Jersey City-based non-profit organization, is currently raising money to purchase computer equipment for children whose families cannot afford to do so. The organization strongly believes that enabling children to learn at home, through remote instruction during the C...
View on Facebook
·Share

The coronavirus testing site at the Tower Plaza Mall in Weehawken will be closed on Friday, July 10th. ... See MoreSee Less