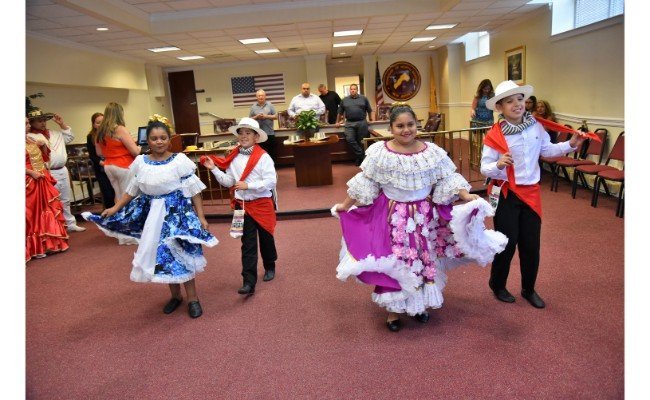 In celebration of the 208th anniversary of Colombian independence, Mayor Nicholas Sacco raised the Colombian flag over town hall on Friday, July 20. Joining him were Commissioners Hugo Cabrera and Julio Marenco and a large group of residents and neighbors. Commissioner Cabrera, speaking in Spanish, noted his own Colombian heritage.

The Independence Day flag-raising was preceded by festivities in town hall, including dance performances by Orquideas de Oro in colorful traditional costumes, and the singing of the American and Colombian national anthems by Michelle Galves.

The mayor and commissioners then took the opportunity to present Galves with a certificate of appreciation for her musical talent and community spirit. Also receiving certificates were Fernando Escobar as Colombian Journalist of the Year; Nurys Capello for keeping Colombian culture alive in North Bergen; Gustavo A. Correa Osorio for his work as a painter and fine artist; and Gabriel Jaime Rodriguez Naranjo, the president of ARPA Marketing Inc., for being a great Colombian leader.