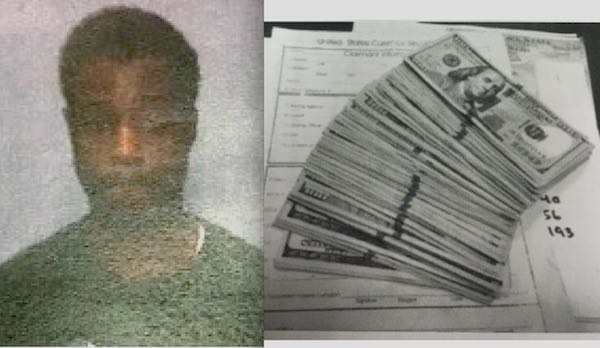 At about 6 pm on 11/1/2016 Port Authority Police saw a 2012 Dodge Charger with the suspect in the passenger seat enter the toll lane at the Holland Tunnel Toll plaza in jersey City.  The Officer detected an odor of burning marijuana emanating from the gray Dodge.  The officer pulled the auto over.  The driver , a 24 year old man from Hempstead, N.Y.  could not furnish police with  a valid insurance card. The suspect, in the passenger seat volunteered the vehicle belonged to his mother but could not produce any identification. He said there was a marijuana ‘roach’ in the car.  The brunt marijuana cigarette was in the center console. In the passenger compartment 6 bank/credit cards with various names 4 passports with various names and nations, a check in the amount of $13,103.00 written to a name on one of the passports and over $8.000.00 in cash with a bank receipt on the vehicle’s  floor was recovered.  The suspect indicated that the cards belonged to his friends but could only name one of the names listed on the documents.

The suspect was placed under arrest. The driver was issued a summonses for Failure to exhibit a valid insurance card. The suspect was transported to Hudson County Jail and lodged. The Dodge was impounded.