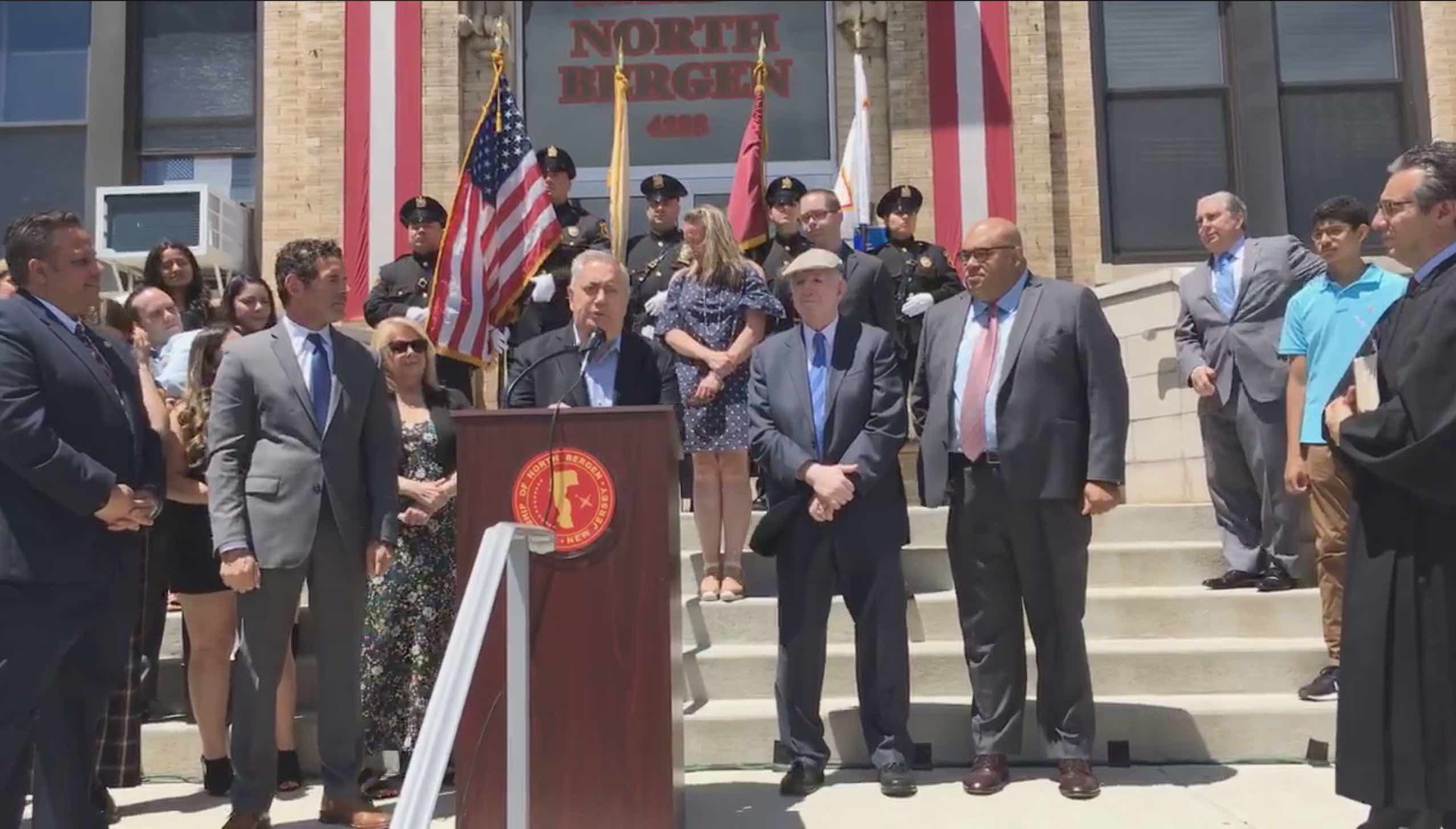 North Bergen NJ. Family, friends and voters basked in the sun outside North Bergen’s Town Hall, this morning, soaking in the rays and the glory for Mayor Nicholas J. Sacco and Board of Commissioners who won last Tuesday’s election with 72 percent of the vote.

Standing on the steps along with Mayor Sacco were Commissioners Allen Pascual, Hugo Cabrera, Frank Gargiulo and Julio Marenco – all re-elected for another term.

Commissioner Marenco joked about sometimes receiving late night calls from Mayor Sacco, but it was all in good fun as he pointed out that they proved how dedicated Mayor Sacco is as Mayor of North Bergen. Commissioner Cabrera mentioned how all four commissioners – and Mayor Sacco — went door-to-door stumping for votes, chatting face-to-face with their North Bergen constituents and sharing plans for North Bergen’s future.

After the commissioners spoke, Mayor Sacco took to the podium and shared some insights about his tenure as Mayor of North Bergen. He spoke of the achievements he and the Board of Commissioners accomplished including enhanced parks, additional police officers, improved schools, and the new recreation center. Mayor Sacco said that the people of North Bergen are his highest priority; and he pledged to work hard for an even better North Bergen in the next four years.

After the swearing-in ceremony, the Commissioners walked around the corner to the Town’s Municipal Chambers where they voted on which commissioner would take charge of various city services. Once again, the Commissioners agreed Mayor Sacco should continue to serve as Mayor of North Bergen as the assembled crowd cheered and gave the eight-term mayor a standing ovation.

After the re-organization meeting, friends, family and supporters dined on sandwiches and Mayor Sacco and the Board of Commissioners posed for pictures with a cake decorated in green and yellow buttercream icing, and featuring Mayor Sacco’s likeness. Carlos’ Bakery “Home of the Cake Boss” in Hoboken donated the cake.

You’re a Jersey City Municipal Employee; How Does a 4 Day Work Week Sound?

The City of Bayonne has just tweeted the following about the Bayonne Municipal Court. ... See MoreSee Less

“North Bergen invites residents to attend a drive-in movie at 8:30pm on Mon, July 20. The film is “Jurassic Park,” at North Bergen Pool Complex. Only 100 cars to be admitted. Register in advance on Weds, July 15 at Recreation Center, 2-9pm. t.co/tWFYvfPofU #NorthBergenNJ”
View on Facebook
·Share

Hoboken to get major infusion of federal funding to assist small businesses recover and for COVID-19 relief. ... See MoreSee Less

Last week we learned that Jersey City was getting a major influx of federal CARES Act money, over $7 million, to assist the city’s small business community which, like many businesses across the nation, has suffered greatly from the COVID-19 pandemic. Today, the City of Hoboken announced it will b...
View on Facebook
·Share

You're a Jersey City Municipal Employee; How Does a 4 Day Work Week Sound? - Hudson TV

You are a municipal employee employed by Jersey City. Would you like to work four days a week rather than five? Well, that option was floated in a tweet this morning by Mayor Steve Fulop. The Mayor says employees of the city will be given the choice to work four days instead of five, should […]
View on Facebook
·Share

Which agencies?Police, Fire, Sanitation are “around the clock” municipal agencies.

Good idea. Too bad the post office would never go for that

Is there a reduction in salary with that?

Day 5 you go to your supervisor’s home and do yard work. Oops! You already do that!

The Democrat should have been wearing masks for years when cashing their checks.

Give us free college you meely mouth neoliberal hack!!!!!

Guess who this is

You’re a Jersey City Municipal Employee; How Does a 4 Day...