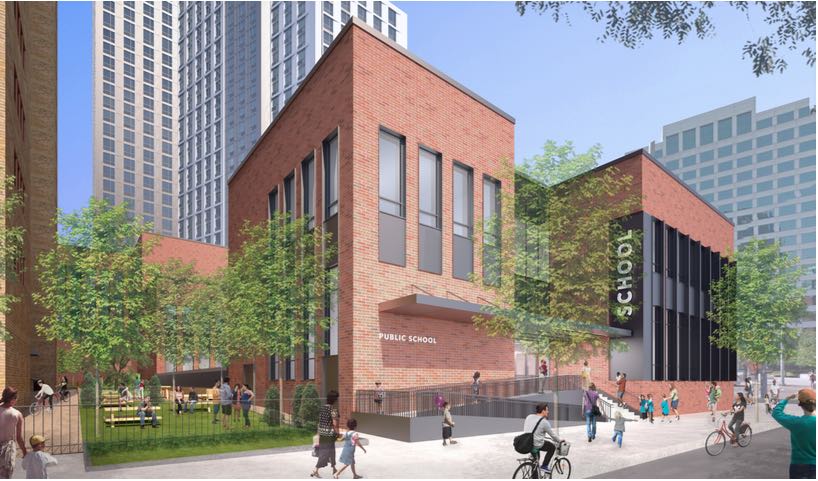 Following PS20 in Greenville, a new Pre-k to 5th public school in the Heights, and Head Start on the West Side, New Public School to be built Downtown as Part of Private Residential High Rise Development

Finding innovative ways to bring public school classrooms without relying only on state subsidies has been a goal Mayor Fulop first proposed as a councilman and later as part of his platform while running for mayor. This will be the second public educational facility constructed with private dollars and the fourth school to commence construction overall since 2013.

“This project represents an amazing opportunity for Jersey City to be innovative at how we look at both development and creating new school facilities in an urban setting,” said Mayor Fulop. “What’s even better, without spending a dime, we’re getting more mixed-income housing, preserving affordable housing, and building a brand new public school for young children. We are constantly looking at our growth and looking to find proactive ways to find solutions.”

The redevelopment project, located at 25 Christopher Columbus Drive in downtown Jersey City, will convert an existing, underutilized parking lot into new mixed-income housing and will include both a 200- seat public school and open, green space. As part of the project, the redeveloper and the ownership of the adjacent 308-unit Paulus Hook Tower Apartments at 100 Montgomery Street have agreed to extend the term of affordability there – set to expire in 2020 – for another 20 years.

The project is being undertaken by PH Urban Renewal LLC, a joint venture of L+M Development Partners, a New York City-based housing developer, and Low-Income Housing Corporation (LIHC). The project’s design as well as that for the school will be coordinated by Handel Architects, based in New
York.

The proposal was developed in coordination with the Jersey City Redevelopment Agency (JCRA) and the Division of City Planning to correct 1970s-era planning that led to disparate, disconnected city blocks. The new site will be more accessible, more public, and more consistent with ongoing redevelopment in the City’s downtown.

“We’re delighted that the Mayor’s Office has facilitated this public/private partnership that will provide a high quality education in a state-of-the-art facility for the young families in Jersey City,” said Dr. Marcia Lyles, Superintendent of the Jersey City Public Schools.

“I want to thank Mayor Fulop for his leadership and PH Urban Renewal LLC for their commitment to create this wonderful opportunity for our children,” said Vidya Gangadin, President of the Jersey City Board of Education. “It shows that we can solve difficult problems with cooperation and ingenuity.”

The Jersey City Board of Education was presented with the proposal at their Aug. 25th meeting and they voted unanimously to support the construction.

As part of the project, the JCRA and Planning Board will both consider this week adoption of redevelopment plan amendments to rezone the existing parking lot to allow for residential, retail and community facility uses. The rezoning would allow for up to 750 new apartments, the construction of a new public school, maintenance of the current affordable units located at 100 Montgomery Street, and 37 apartments to be set aside as affordable housing for low-to moderate families and individuals earning no more than 80 percent of Area Median Income (AMI).

“We look forward to embarking on this project with the support of Mayor Fulop and to providing much- needed school seats and mixed-income housing that is responsive to the needs of this growing community,” said Jonathan Cortell, Vice President of Development, L+M Development Partners.

Since its founding in 1984, L+M Development Partners, Inc. has been an innovator in developing quality affordable, mixed-income and market rate housing, while improving the neighborhoods in which it works. A full-service firm, L+M works from conception to completion, handling development, investment, construction and management with creativity that leads the industry. L+M is responsible for more than $4 billion in development, construction and investment, and has created or preserved more than 15,000 high- quality residential units in New York’s tri-state area, the West Coast and Gulf Coast regions. L+M brings a superior level of commitment to its investments in developments, and equally important, to its investment in people. For more information, please visit:http://lmdevpartners.com