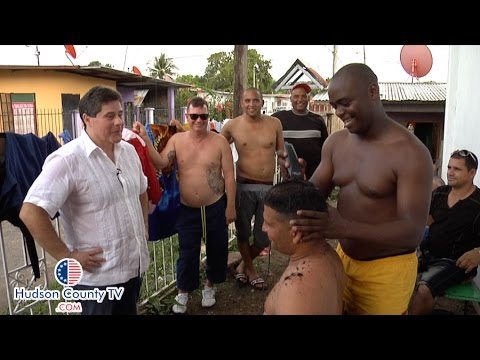 The Mayor of West New York, New Jersey, Dr. Felix Roque, along with the “Damas de Blanco” -Ladies in White, want to raise awareness on what is happening today in Cuba.

Dr. Roque never thought that Cuba would become the circus world, and that the President of the United States, Barak Obama, was the Master of the Ceremonies of this great cérquense tent. He invited exceptional puppets to join him in order to achieve and capture the audience and the rest of the planet.

The first act of the Cuban Circus was Rolling Stones’ performance: in good faith they sold all the rights, something that hasn’t been done in Mexico, otherwise they were to pay all the taxes.

Things in Cuba went the other way round: taxes weren’t paid when they sold all the broadcast rights of their live concert from Havana which is already on sale.


The second act of this great Cuban Circus is the “Fast and Furious” movie. Not only it has wreaked havoc on the locations where they are rolling, but they are engaged in parties with minors. Everyone on the island knows about it. Too bad that the director forgot that those minors prostitute themselves in order to survive. These people are having sex with girls who do not reach 16 years old, and there’s no doubt about it. They just have to ask Yaslein.


The third act, as usual, is with the animals: what’s better than using COCO CHANNEL, where beauty is indomitable. Who gives commands in this animal ritual is obviously Raul Castro’s daughter.

To conclude this great Cuban Circus in Hollywood-style, the Kardashians gave their contribution to ensure the tickets to go SOLD OUT. The goal has been fully accomplished and the foreign society as well as the social media had their news ready.

“Castro has created a very good strategy to make the world forget what is really happening in Cuba: poverty, repression, assassinations, missing people, the violation of human rights. The most incredible thing is that a communist country, where the “Damas de Blanco” still get arrested and raped every day, where children prostitution is the everyday reality, where there is no freedom of expression.

As a Cuban father, son, husband, brother, who holds the reins of a city, I can’t allow this to continue.

This is the reason why I raise my voice and I will use all the necessary force along with the “Damas de Blanco” so the world doesn’t forget what happened, what is happening and what will continue to happen in Cuba while the Castro family remains in power. I know that his generals have their hands tied because the Castros have the absolute power on the army and fear disobedience: the consequences are jail or death”.


Dr. Felix Roque, Mayor of  West New York NJ, began a campaign to rise world awareness on the consequences of supporting this great Cuban Circus that the Castros have orchestrated in order to continue manipulate the tent clowns.

ABOUT FELIX ROQUE
Felix Roque, is a Cuban-American Doctor, who came to the United States at age 11, served in the United States Army since1976, and is now Retired Colonel from the Armed Forces; on April 27th, 2010 he was elected mayor of West New York.