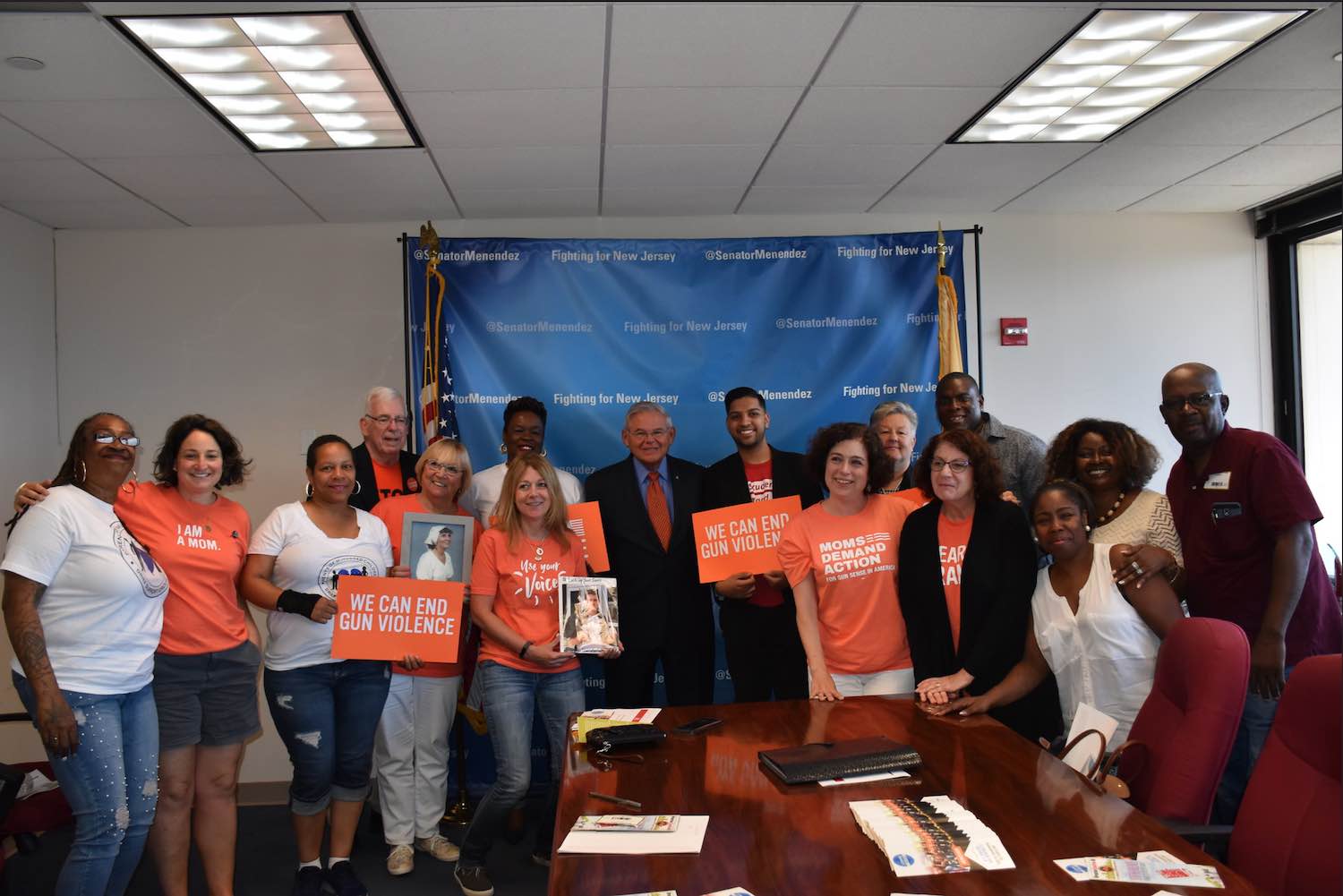 NEWARK, N.J. – As mass shootings continue to wreak havoc across the country, including last week’s massacre in Virginia Beach that left 12 local residents dead, U.S. Senator Bob Menendez met with over a dozen gun safety advocates in his Newark office as they prepare for tomorrow’s National Gun Violence Awareness Day.

“Enough is enough. Gun violence has taken the lives of too many of our friends, children, neighbors and co-workers. said Sen. Menendez. “This is a public health crisis that demands all of our attention and I’m grateful for the tireless work of advocacy groups in New Jersey and across our country who’ve spent years keeping up the pressure on members of Congress to take action. If Republicans would just quit kowtowing to the NRA and stand up for common sense gun safety reform, we can begin to end this senseless bloodshed and save lives.” 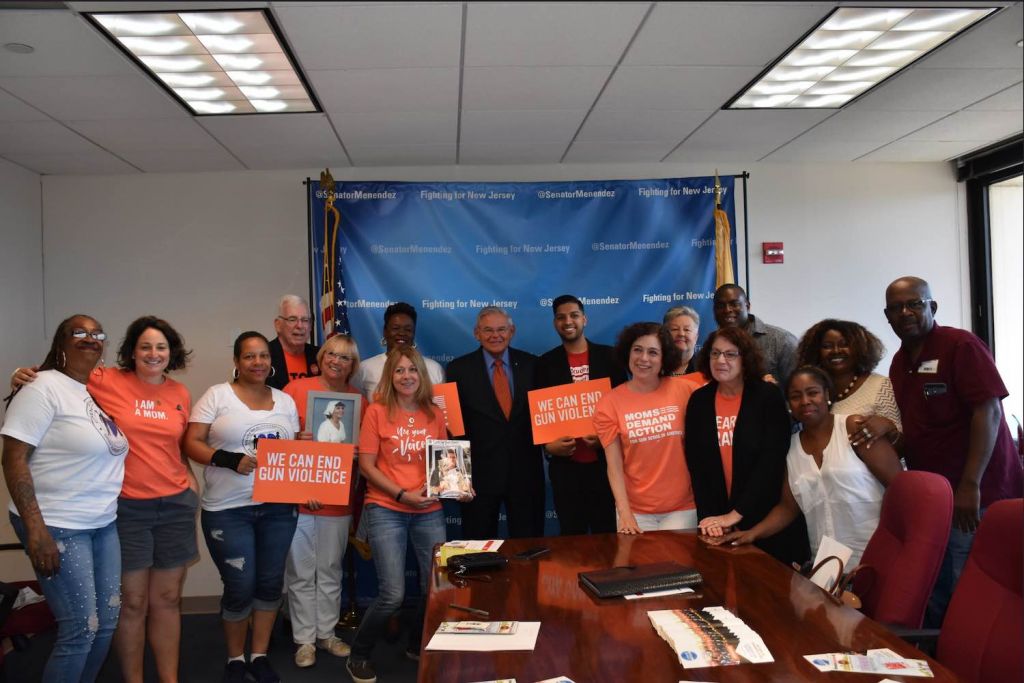 Advocacy leaders discussed various topics such as gun violence as a public health crisis, current gun safety reform proposals in Congress, the ease of access to firearms and how their lives have been personally affected by gun violence.

Sen. Menendez has been one of the leading voices in Congress for common sense gun safety reform and discussed his many legislative efforts that would put an end to gun violence.

Earlier this year, Sen. Menendez introduced the Keep Americans Safe Act, a piece of legislation that would ban the importation, sale, manufacture, transfer, or possession of gun magazines that hold more than ten rounds of ammunition. He also introduced a bill that would block the Trump Administration’s efforts to weaken controls over foreign arms sales and allow for the unfettered proliferation of untraceable, undetectable, 3D printable guns that threaten public safety.

He cosponsored a bill to authorize the appropriation of $60 million in federal funding to the Centers for Disease Control and Prevention for conducting research on firearms safety and gun violence prevention. The senator also cosponsored a bill that would give incentives to states to enact and implement Extreme Risk Protection Orders, which empower law enforcement and family members to seek a court order to temporary block an individual’s access to guns if they pose a threat to themselves or the public.

Sen. Menendez requested information from the National Rifle Association and their advertising agency, Ackerman McQueen, to investigate allegations of self-dealing and whether the organization should maintain its 501(c)(4). He demanded Facebook do more to block gun sales facilitated on its social media networks.

Last September, Sen. Menendez and Congressman Bill Pascrell, Jr. (D-N.J.-09) held a rally with advocates to highlight what’s at stake for the progress of gun safety across the nation if Brett Kavanaugh was appointed to the Supreme Court.

Last summer, he introduced two pieces of legislation to combat the threat posed from the spread of 3D printable guns. The 3D Printing Safety Act and the Untraceable Firearms Act of 2018. Sen. Menendez went to the Senate floor to try and unanimously pass this emergency bill, but Republicans blocked the vote. He also held a press conference in Cliffside Park with local officials and Moms Demand Action to rail against 3D guns.

He sponsored legislation that would close the gun show loophole, outlaw “bump stocks” and other devices that make semiautomatic weapons fully automatic, prevent those on the Terror Watch List from purchasing guns, and improve access to mental health and addiction treatment.

He met with members from the South Jersey Chapter of Moms Demand Action last May, who delivered postcards from its members voicing their opposition to the Concealed Carry Reciprocity Act, which passed the House late last year. The bill would force each state to recognize the concealed carry standards from every other state, even those that have weaker standards.

Sen. Menendez participated in a “Town Hall for Our Lives”, hosted by Students Demand Action of Bergen County. The event, which was one of more than 120 town halls held across the country, was a national effort urging lawmakers to pass commonsense gun legislation.

He visited the Essex County Police Academy with Sheriff Armando Fontoura to witness firsthand the power of an AR-15 assault rifle during a live-fire demonstration by the sheriff’s officers. The military-style weapon was used in serveral mass shootings, including by the gunman who took 17 lives at Marjory Stoneman Douglas High School last year.

Why should he have to apologize,he is entitled to voice his thoughts and how he feels. He does not owe anyone an apology. Mr Unanue you keep up the good work and don't worry about all the simpletons and there negative feed back. Remember those are the same ones that were cheering you when #44 was president and you helped them. They are just full of hypocrisy now!!!

Good luck pandering to racists and white supremacists. Pockets in those red states have never heard of Goya. There are lots of other Hispanic brands that can have my money.

Apoligize? Are these people out of their minds? Are they really trying to shut people up, what next? Can't say you Love Jesus? Dems have gone to far, vote them out across the board.

FREEDOM OF SPEECH!!! He doesn’t need to apologize!! People here saying and mad because he doesn’t support Latinos!! 🙃 while Latinos don’t support each other in daily basis!!

Dont give in to the libs. This is why Amazon didnt come to NY and lost this area thousands of jobs

Why should he apologize? He likes our president. It's his opinion and his right to stand behind the president.