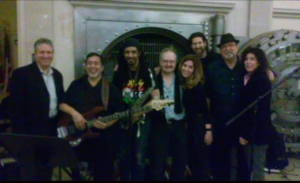 Last Monday night was the first event of Musical Monday at the Museum on Broadway in Bayonne.
Bayonne residents danced Monday night under the stain-glassed fresco ceiling of the Bayonne Museum. Dancing to the melodies played by Blue Dawg Band…”Playing Classic Rock and hiding the Blues,” the band brought the house down!

“Events here are to promote downtown Broadway and hopefully bring more people out to stop by restaurants and businesses. It was a terrific turn out tonight,” Terrence Malloy, Bayonne UEZ Coordinator said.

Mayor James Davis sponsored the program which drew a crowd of over 50 to the wonderful sounds. Bayonne-based Blue Dawg Band with a saxophone player, Julian Meyers, would impress the likings of Clarence Clemons. 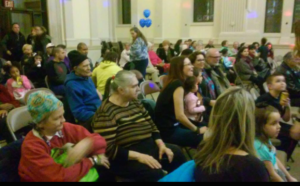 “What a good turnout on a Monday night for our first event of Musical Mondays in Bayonne. This concert series is a prelude to our Spring and Summer events coming up,” Mayor James Davis said.

“Bayonne is a neighborhood town and getting people out is a way to bring people together,” Davis said.

Blue Dawg Band knows how to get crowd participation by jumping right into the crowd and playing their instrument to get the people pumped!

“I liked the music and the band got people into the mood to dance,” Josephine Halma, Bayonne said.

Families gathered with children and danced in the aisles of feasting on Sabrett Hot Dogs and Yoohoo, Chocolate Milk.

“It was a good selection of music, and we need something like this for the community,” Diane Sondy, Bayonne resident said. 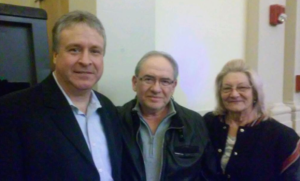 The community event is free. The next event is March 14 featuring The Shots! Doors open at 6:30 P.M. The show starts at 7 P.M.