The Chelsea area of Manhattan was rocked by a powerful explosion Saturday night, shattering windows, sending debris flying into the street and closing many city blocks. 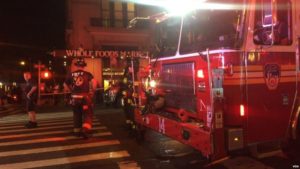 Councilman Corey Johnson, whose district includes the area of the explosion — said it happened about 8:30 p.m., at 133 West 23rd Street and Avenue of the Americas.

That’s outside Associated Blind Housing, a 14-story building with 210 units for the blind and visually impaired.

The blast affected 29 people, none of whose injuries were believed to be life-threatening, according to officials.

Witnesses noticed it emanating from a dumpster.

According to police, a “possible secondary device” had been found at 27th Street between Avenue of the Americas and Seventh Avenue.

At an 11:15 p.m. news conference, Mayor Bill de Blasio said the explosion didn’t seem to be terrorism related but did appear to have been “an intentional act.”

The Bureau of Alcohol, Tobacco, Firearms and Explosives federal task force responded, they said on Twitter.

Officials from Homeland Security were also on scene.

President Obama was briefed of the developing situation and “will be updated as additional information becomes available.”

Luke McConnell of Colorado was making his way to dinner on West 27th Street.

“I heard a big boom,” McConnell says. “There was a cloud of white smoke — no fire,  just smoke.”

A 24th Street resident, J.B. Rund called it an “earsplitting explosion” that sounded like a bomb went off and the ground started shaking.

Subway service was also interrupted on the E and F lines, according to the Metropolitan Transportation Authority.

The explosion occurred 11 hours after an improvised device exploded in a garbage can 9:30 Saturday morning near the beginning of a charity race in Seaside Park, on the Jersey Shore.

There were no injuries and the Marine Corps event was canceled.

“I must tell you that just before I got off the plane a bomb went off in New York and nobody knows exactly what’s going on,” said Donald Trump, campaigning in Colorado Springs. “Boy, we are living in a time — we better get very tough, folks.”

Hillary Clinton was told about the incident after speaking at the Congressional Black Caucus Foundation’s annual awards dinner, according to her campaign.

The New York Fire Department says at least 24 of the injured have been hospitalized.

What caused the explosion, who is behind it and the extent of the damage is part of the ongoing investigation, New York officials say.

Stay with Hudson TV on this developing story.