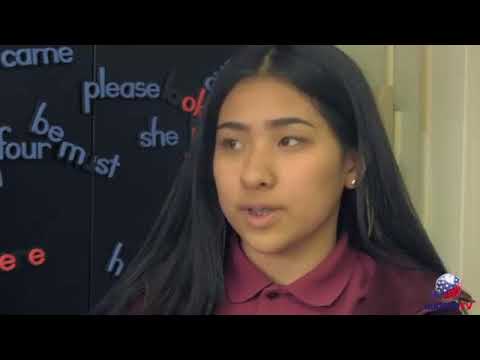 She escaped a towering inferno by jumping from a second floor balcony that engulfed her  dance studio in Edgewater Monday night — and now Samara Lee opens up about the traumatic experience.

The 14-year-old who takes classes at Professional Arts Academy on Old River Road three times a week was in the middle of a vocal lesson when she caught the smell of something burning and thought it might be from next door.

That smell of smoke was followed by something much worse, leaving Samara, seven other girls and their teachers with no way out…

“The air was smelling bad and there was a door so we opened it and the smoke started coming into the place,” Lee says.

An eighth-grader at North Bergen’s Lincoln School, her principal couldn’t believe what had happened.

“I had no idea, saw it on the news but I didn’t know one of our students was involved,” says Nick Sacco Jr.

The girls made their way to a nearby balcony, hoping that would be their escape route.   “We went outside but the flames were right there Lee says, adding that they thought one option remained and that was the stairs – but it too was on fire.   “The only choice was to get in a corner and it’s either you jump or I don’t know,” Lee says.

Harrowing video shows good samaritans on the ground with ladders trying to help the girls down but the ladders were too short.   According to Lee, she tried going down and when she touched the ladder it fell.

“So I was like what am I going to do now,” she says.  “People were screaming at us, ‘jump, jump, jump.’ And then they told me to run because behind me was the fire, the flames underneath.”

The aspiring Broadway star who also takes hip hop classes was left with scratches and bruises, (the other girls injuries were also mostly minor)… but the emotional scars of this ordeal may linger.

“You see it on television but you never assume that’s going to happen to you one day and when it does it’s just like, ‘wow, like I could have died.’”

With two missing girls on everyone’s radar (they were ultimately rescued) and the ensuing panic with a still raging fire –  Samara is just taking one moment at a time going forward.

“I know how brave she was and how she took care of herself and the fact that she came to school for perfect attendance after going through that, I can’t even imagine,” Sacco says.

She didn’t need to stay there a second longer after the terrifying ordeal.

“The minute my dad came, I just got checked up on and I left. The fire was not off, it was still going so I didn’t want to be near the place,” Samara says.

The principal says he’s so proud of her as a person and is going to miss her when she graduates.  “She’s one of the best we’ve ever had,” Sacco says of the honor student.

The fire remains under investigation, stay with Hudson TV for updates.