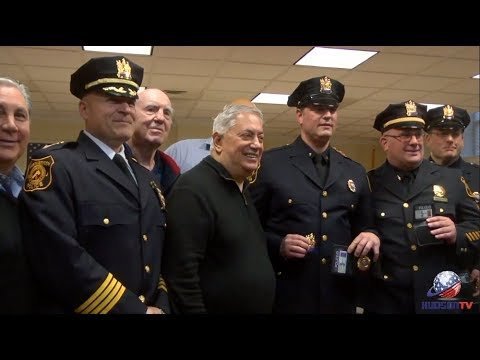 It was a proud moment for the North Bergen Police Department on Wednesday as they promoted three of their own.

The packed house gave the officers a warm welcome as they assumed their new ranks — John Stahl to the rank of lieutenant; Joseph Gorrin and Thomas Yfantis to sergeant.

The very best executives fill their ranks with people that are competent and go out of their way to do their job.

“I do provide a vision and some direction but it’s the men and women in this department that provide all the hard work,” Chief Robert Dowd says.

“What I really want to do is to just be a leader to these all guys,” says Sgt. Thomas Yfantis.

As a first-line supervisor it’s about their ongoing commitment to the department and one of positivity.

“Training them, mentoring them, leading them,” says Gorrin.  “Just being the leader and guide the young officers in the right direction,” add Yfantis.

And the mayor has made sure Chief Dowd has the authority to do what he needs with the department.

“Look at the outcome, what the Chief has done is create a department that is not only number one in Hudson County but within the top 10 in the state,” Mayor Sacco says.

You can be sure you are protected by these exemplary officers who’ve dedicated their lives to serving the citizens of North Bergen.

When it comes to making this happen, it starts at the top.

“On the promotion front really all the praise goes to the commissioners and the mayor,” Dowd says.  “They provide the funding, the support, the budget.”

The officers are out there 24 hours a day, seven days a week.

“Snowstorms, Christmas, Thanksgiving, their child’s birthday — they come to work day in day out. They provide a quality service that I’m quite frankly very proud of,” Dowd says.

At the end of the day this is an unbreakable bond.

“You saw me talking to the mother of one (officer) I’ve known for many, many years. It is like family. It is family and that’s what I think makes this community so good,” Sacco says.