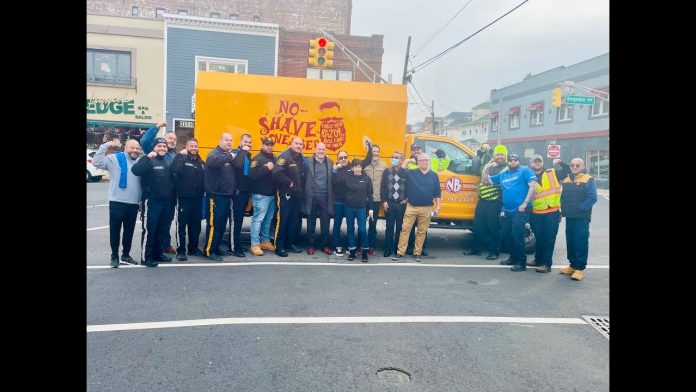 It’s that time of year again, where many of Hudson County’s finest forgo shaving and grooming to raise cancer awareness.

It means so much, starting a dialogue and keeping the conversation going. That cancer awareness is everything.

“Letting the community know how important it is to get screened for colorectal cancer,” Ceragno says, adding that new guidelines lowered the screening age from 50 to 45.

The town is so supportive and opens its arms to this worthwhile cause every year.

“The police and the DPW and Fire Department and everybody, of being aware and giving them any information that we can give them during the year about being screened for colorectal cancer,” says the cancer survivor.

The commissioner says that prior to the onset of this event (years ago), he wasn’t even getting himself screened.

“You know, it’s all about early prevention and doing what you’re supposed to do to take care of yourself,” Pascual says.

This is obviously, for people who may not know him — a cause very close to Bob’s heart.

“It was a very quick situation… that I found out that I had colorectal cancer with chemo and radiation,” says Ceragno. “If I can bring any little information to anybody in town — there’s a lot of new fellas. It’s important to me that they know what’s out there and how to be screened.”

At the end of the day, it’s crucial to be an advocate for your own health.

“It’s important to get out there and make sure there’s early detection and take care of yourselves,” the commissioner says.

It’s another year for the books and a great one at that.

“Between the North Bergen/Guttenberg PBA and the DPW and a few customers, we’ver raised over $5,000 today,” says the cancer survivor. “It will go to research for colorectal cancer to Fight CRC.”