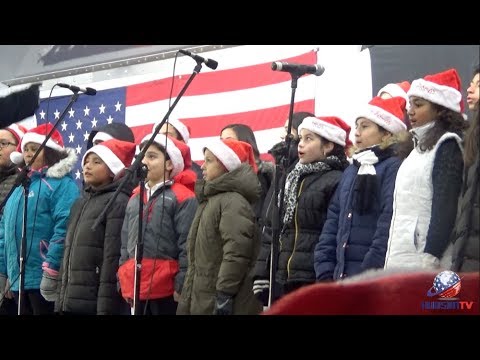 Snow was a no-show but Winterfest was a definite go as North Bergen hosted their second biggest holiday event of the year on Wednesday night and the crowds were having a blast.

Another student says she likes that they have all the rides and the nice hot chocolate.

“The music is really nice here and I like the pretzels a lot,” she says.

“The rides for the kids, Santa Claus — it’s an all around good time here in town and we love it,” Bader Risheg says.

According to Mayor Nicholas Sacco, this is the third year they have been holding it downtown.

“And we moved it here and to 45th Street in order to reach more people,” the mayor says.

If you can’t make the uptown Winterfest for whatever reason or it’s just too out of the way, doesn’t mean you can’t still enjoy the festivities…

“They get to do this right in their backyard,” says Commissioner Julio Marenco.  “So that gives everybody in the downtown vicinity areas a chance to get and enjoy a winter celebration with their neighbors.”

Hari Patel had fun at the event and his favorite part…

“When the chorus was singing,” says the Kenny Elementary School student.

It’s the perfect event where everybody is united, kids, happy, singing and enjoying the moment.

“I see my friends back there, my sister right there,” Patel says.

If it wasn’t for the kids, this teacher says obviously he wouldn’t be there but just for them, he  returns every year…

“You just missed out, he just ate a whole bunch of cotton candy,” Risheg says of his son. “And like most kids he’s sugar addicted.”

This is a completely collaborative effort.

“Everything is through the mayor and commissioners. Every department helps individually — Parks and Recreation, DPW, Police Department. Everyone got together and we made it happen,” says Commissioner Marenco’s assistant, Nancy Guevara.

“And to give people the chance to see what Winterfest is about,” says Mayor Sacco. “We have the two main chorus’ —- we have McKinley and Kennedy here entertaining and we have various rides and events.”

And at the end of the day – especially at this time of year, it’s all about friends and family…

“A lot of the idea is that we’re following their lead,” Marenco says. “They’ve been doing that for 25 years uptown. Why reinvent the wheel.”

Including a lot of freebies and a holiday photo with Santa — this beats going to the mall any day!

“So it’s really a nice night and I’m very happy to be here with all the people and the residents of this area,” the mayor says.