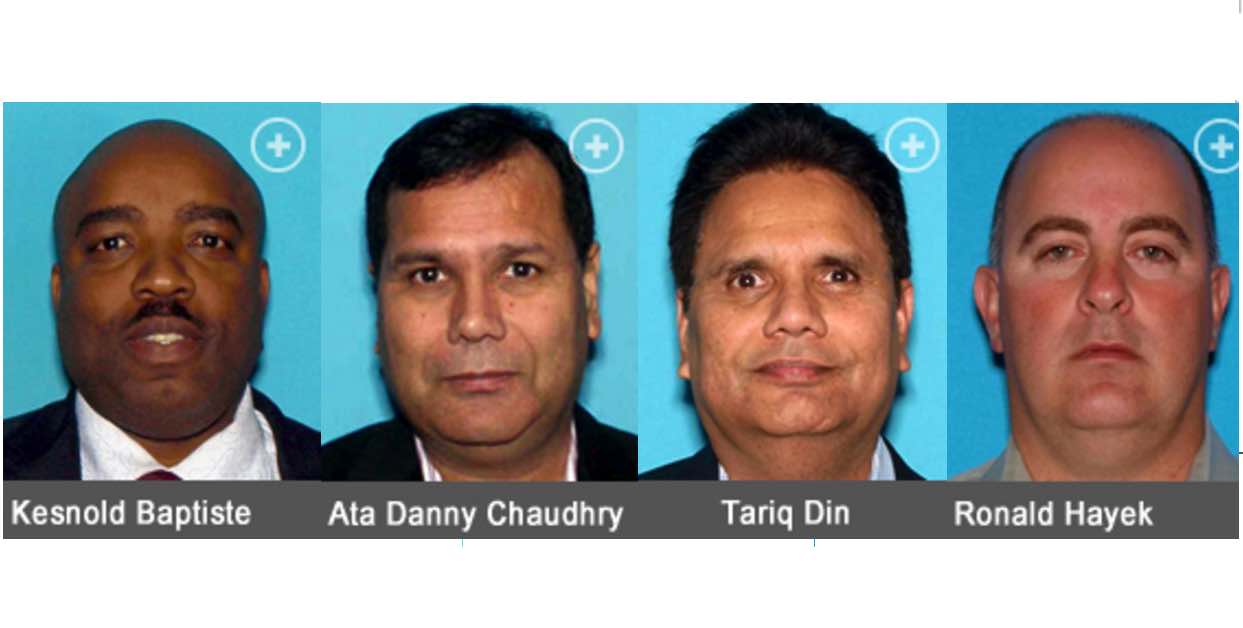 TRENTON – The Division of Criminal Justice and the Office of the Insurance Fraud Prosecutor announced that a North Jersey chiropractor has been arrested for allegedly accepting tens of thousands of dollars in illegal kickbacks from a medical imaging center in return for referring patients to that facility.

The arrest is the latest action taken by the Attorney General’s Commercial Bribery Task Force (CBTF), which was formed in January to target commercial bribery in the healthcare industry. The task force includes deputy attorneys general and detectives from the Division of Criminal Justice Financial & Computer Crimes Bureau and the Office of the Insurance Fraud Prosecutor.

Dr. Kesnold Baptiste, 50, of Roselle, was charged with health care claims fraud, conspiracy, and commercial bribery for allegedly accepting money to refer his patients to a medical imaging facility owned by one of two individuals who previously pleaded guilty in a statewide healthcare-related bribery conspiracy involving dozens of doctors, lawyers, and medical facility operators.

“The type of kickback schemes that we are uncovering with our new commercial bribery task force have a corrosive impact on our healthcare system, leading patients to receive unnecessary diagnostic services and treatments, and ultimately inflating costs for everyone,” said Director Elie Honig of the Division of Criminal Justice. “With these cases, we are sending a message to schemers in the industry that their crimes will be met with aggressive prosecution.”

“Each new arrest by our Commercial Bribery Task Force leads to information on additional doctors, medical service providers, and other professionals involved in a criminal conspiracy that is spreading like a stain across the state’s healthcare industry,” said Acting Insurance Fraud Prosecutor Christopher Iu. “The Office of Insurance Fraud Prosecutor will continue to work with the Division of Criminal Justice to follow each new lead until every one of these co-conspirators is brought to justice for their part in corrupting the health care system and compromising the integrity of New Jersey’s healthcare profession.”

Baptiste is accused of accepting tens of thousands of dollars in bribes from Ata “Danny” Chaudhry, 55, of Paramus, who owns MRNJ Newark, MRNJ Oradell, and Hudson Radiology Center of New Jersey. Another facility owner, Tariq Din, 48, of Paramus, who owns Clifton MRI Facility also known as Open MRI of Clifton, was also charged.

Din and Chaudhry pleaded guilty last month to second-degree charges of conspiracy, money laundering, commercial bribery, and misconduct of a corporate official for paying more than $850,000 combined to more than 15 physicians and other professionals in exchange for referrals to their MRI facilities.

Din and Chaudhry pleaded guilty to charges resulting from the Commercial Bribery Task Force’s ongoing investigation into doctors who allegedly received hundreds of thousands of dollars in illegal kickbacks in return for providing patient referrals worth millions of dollars to other doctors and medical service providers. This investigation stems from two earlier investigations:

Dr. Ronald Hayek, a chiropractor practicing in Totowa, pleaded guilty on July 21 to two accusations. The first accusation, filed by the Division of Criminal Justice Financial & Computer Crimes Bureau, charged him with second-degree conspiracy, second-degree money laundering,six counts of commercial bribery, (four in the second degree, two in the third degree), and one count of third degree failure to pay taxes. The second accusation, filed by the Office of Insurance Fraud Prosecutor, charged him with one count of third-degree conspiracy.