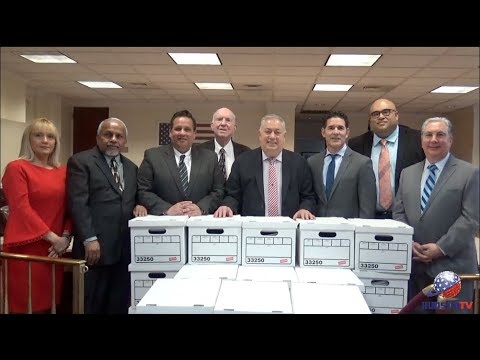 As election season kicks into high gear, the Sacco Team announced on Friday a record-breaking amount of nominating petitions.  And they had the whole slate on hand to open the boxes.


“It’s gone up over 3500 more or 4000 more than we had four years ago. That’s a very high percentage,” says Sen. Nicholas Sacco, Mayor of North Bergen.

For them, it’s personal.

“I saw the changes in the town as I grew up with our parks, our streets, our DPW, our recreation department, so I’ve seen all the changes that the Sacco administration has done,” says Hudson County Freeholder, Anthony Vainieri. “I’m very happy to be part of it and I go out there and I’m very vocal for Mayor Sacco and his administration.”

Commissioner Frank Gargiulo doesn’t take any petition lightly and neither does this administration. He moved into North Bergen in 1947.

“I’ve watched the community grow in the last 30 years we have taken leaps and bounds in improving this community so I thank the citizens for supporting us,” says Frank Gargiulo, Commissioner of Public Works.

Every department is doing an outstanding job and it’s easy to go out and get the signatures from the residents when they’re happy.

“This is a true testament here, when you see over 10,000 petitions it kind of tells you, you know you’re doing a good job,” says Public Safety Commissioner Allen Pascual. “And with the leadership we have here under Mayor Sacco; this township has never been in the position it is today.”

“The reason we can have these numbers is because we know our neighbors,” says Julio Marenco, Commissioner of Finance and Revenue. “Living here all our lives it’s easy to go and say hello to your neighbor and say what a great job we’re doing, how hard we work for you and thank you very much.”

When the mayor is being persecuted with what he considers lies… the only thing to do is step up and address them.

“Like my Senate voting record is a very progressive voting record. From women’s health bills I’ve been supporting for years and then being vetoed for years under the former governor and minimum wage,” Sacco says.

When it comes to their opposition, makes a big difference when the residents hear from somebody who’s been in North Bergen all their life.

“This man was a business man in North Bergen that couldn’t get what he wanted so he turned ‘baby,’ like in the schoolyard — didn’t get his candy so now he wants a part of it,” Vainieri says.


And it gives the mayor the opportunity to tell the truth.

“I believe that people know that when I speak I tell the truth and I don’t try to skirt issues, this is what the facts are,” says Sacco.

For the freeholder, it’s about keeping North Bergen moving forward.

“We have stable taxes, we’ve got a bond rating that’s the best in the county. We have a police department that’s the safest community in the county,” the freeholder says. “Our DPW is second to none, our recreation is impeccable.”

This is very exciting because it shows that the people approve of the job that they’re doing.