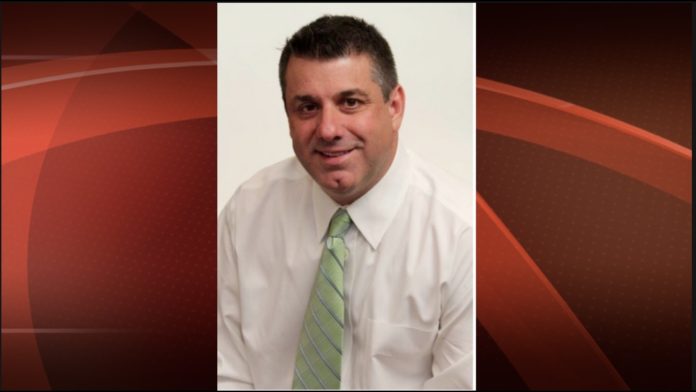 He’s a prominent Secaucus lawmaker who got himself in some hot water.

Secaucus Police charged Councilman Robert Costantino and his girlfriend with concocting an elaborate story about the details of a car crash.

It all started September 23 when Costantino and Dawn Leon were driving southbound in the area of 701 3rd Street. Leon says another driver veered into her lane of traffic from the right side of the road and made contact with the driver’s side of her car.

According to 49-year-old Costantino, he exited the vehicle when the crash occurred and began to yell at the driver of the other car.

The Councilman says Leon, 47, did not leave the car but climbed over the center console into the passenger seat while he was still in it. Costantino then got into the driver’s seat and drove to their final destination, about 100 feet from the original crash.

According to the other driver, Ricardo Goncalves of Colonial Concrete — he was facing the left side of the street pouring concrete when he moved his vehicle transporter forward and made contact with Vehicle 2, a Ford Expedition.

He says the driver got out and started yelling at him and the other workers, announcing that he was a town Councilman and there was nobody else inside the truck.

Goncalves, a paving foreman and two other workers all described the driver as a white middle-aged man wearing a white t-shirt.

Costantino and Leon repeatedly told officers that Leon was the one driving and at no time did he get behind the wheel until after the crash. They saw a scuff mark and white paint transfer on the passenger side tire and rim of Vehicle I (the concrete transporter), which was within consistent height and area of impact with the Expedition’s damage. There was also a large dent and scuff marks on the driver’s side bottom door streamer and door sill.

Surveillance footage from 724 3rd Street does not show the crash, but does show the driver wearing a white short sleeve shirt, corroborated by all the witnesses. Reporting Ofc. Petrov confirmed the driver as Costantino and added that he did not see the silhouette of a woman in the front passenger seat wearing a brightly colored sundress, which would be Leon.

He also did not see the aforementioned vehicle pass the area of the camera northbound at anytime. The footage subsequently shows the contractors and concrete truck backing up into the view of the camera.

Petrov asked Costantino if there was any reason why three separate individuals mentioned he was the driver when the crash occurred, and the Councilman claimed he didn’t know what they were talking about.

“They only speak Spanish,” Costantino says.

Leon told the officer that she was coming from Bagel Buffet and made a left turn from Front Street onto 3rd Street.   Petrov says the intersection of Front and 3rd Street is a one-way going north, which she would not have been able to make.

“Due to the inconsistent statements from Mr. Costantino and Ms. Leon from the day of the incident and today’s conversation, along with the video footage collected from the scene clearly showing Mr. Costantino operating the vehicle prior to the crash, and having three separate witnesses place him behind the wheel of the car when the crash occurred, I believe the driver during the crash was Mr. Costantino,” Petrov says.

Dawn Leon was charged with the same offense.